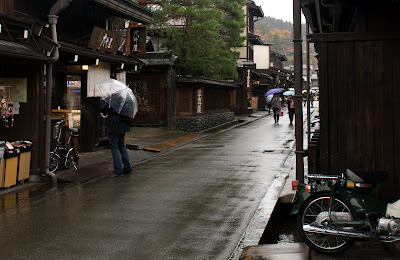 Travis took a day off to spend hanging out with me, and we decided to drive to nearby Takayama in Gifu Prefecture. I had been before during the fall festival, which is famous as one of the three best in Japan, so it had been very crowded. I was eager to see Takayama when it was a little less packed with humanity. 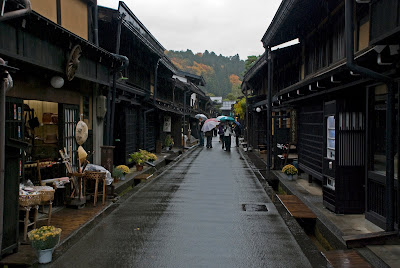 Takayama is a pretty easy day trip from Kanazawa if you are driving, but more of a weekend excursion if you take the bus. The town is famous for the well preserved Edo era town center, with old wooden shops and houses filling several square blocks. We found it was also quite famous for its sake, and we both picked up a bottle of milky white unfiltered Nihonshu.

I suppose the drizzling rain did its part to keep the crowds to a minimum, but I would have preferred sunshine and blue skies. We stopped for lunch at a small restaurant that served only hand made soba. Soba are buckwheat noodles, and are always served cold. In the summer, soba noodles are dipped in a cold broth as a refreshing meal in the sticky heat. Our late fall meal presented us with a hearty hot soup of duck and vegetables to dip the noodles into. I've always bought soba from the convenience store as a quick and cheap meal. It's not bad that way, but in no way compares to how amazingly delicious this simple dish tasted. 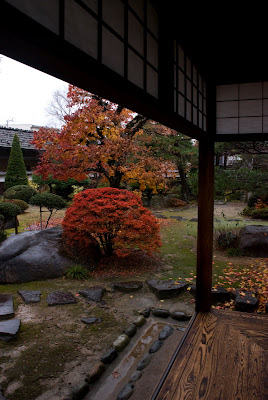 We also stopped by the old administrative center of the city and the area. The building had rooms for the local governmental officials and their staff, and it was fun to see a traditional Japanese building that wasn't a temple, shrine or castle. In a country that has seen so many earthquakes and fires, it is always nice to happen upon a little piece of preserved history. 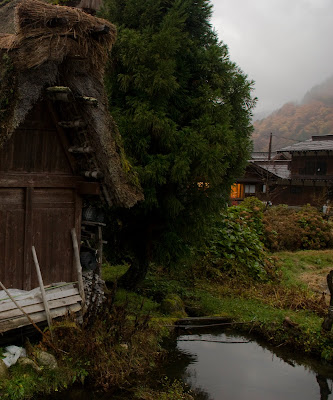 Between Kanazawa and Takayama lies the World Heritage Site of Shirakawa-go. I had stopped at this collection of old farmhouses previously, but since I had been on the bus the stop was very brief. I jumped at the chance to spend some more time strolling among the gassho-zukuri (praying hands houses, so named for the angled shape of the thatched roof.) The area really is very beautiful, and I feel like I have to go back at least once more to really do it photographic justice. The heavy rain clouds and fading light were a great impediment to photography this day. 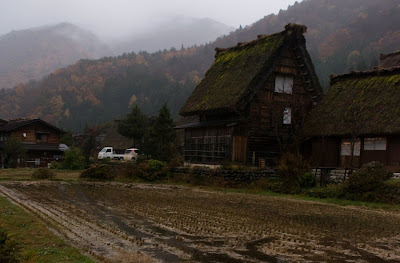 After spending all day walking around in the chill autumn rain, Travis and I both agreed that a brief onsen stop was in order. Near the parking lot was a small local bath house, complete with sauna and outdoor tubs. The best way to cap off a day of sightseeing in the Japanese Alps must be a good hot spring soak.
Posted by Travelingrant at 2:33 AM

Thanks! It's true, rainy days can add a lot of atmosphere and mood to a photograph, but they do make getting the proper exposure more difficult.

So pretty. I will have to visit you next year ;-)