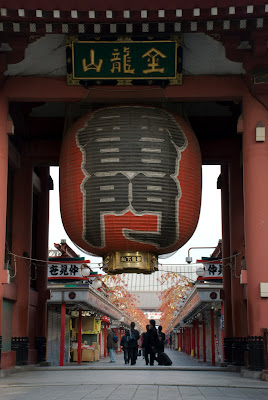 One of my goals on this trip was to see things that I hadn't gotten around to yet. During my two years in Japan I saw a lot of sights, but there is always more to see and do, especially in a city as large and dynamic as Tokyo. One of the places on my list was Senso-ji, the largest most famous Buddhist temple in Tokyo. 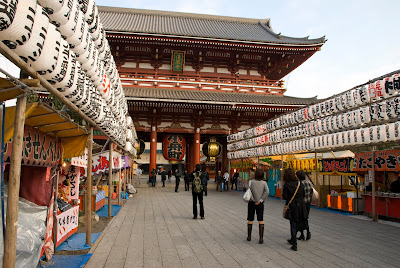 The story of Senso-ji, also called Asakusa Kannon, starts in the 600's when two local fishermen find a golden idol of the goddess of mercy, Kannon in the nearby Sumida river. The temple was built to enshrine the statue, and over the centuries grew to its present dramatic size and popularity. The temple did burn down in the war, and the current buildings are concrete reconstructions. 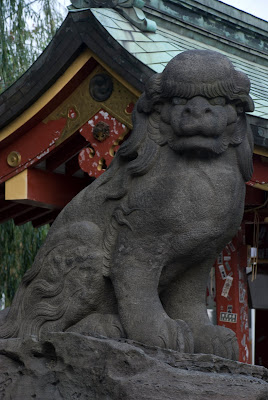 I found that one of the downsides of starting my day before 5 am was that by 8 I had been up for hours, and yet little was open yet. Senso-ji was almost empty, the myriad trinket vendors lining the entrance street all locked up and silent. Even when I walked over to the nearby Kappa-dori, home of the plastic food and restaurant supply stores I found that early Saturday morning was not a busy time for them.

After a fair amount of aimless meandering, I walked back through the temple grounds close to noon, and found that things had picked up remarkably. There was some sort of festival in full swing, so there were street vendors with snacks and drinks on offer, and booths set up to display chrysanthemum flowers. 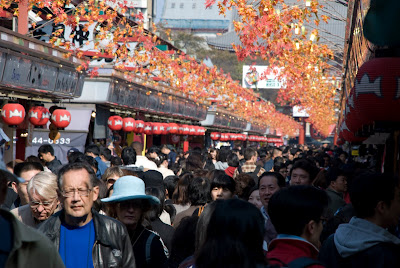 I had intended the trip to Asakusa to take up a full day of sightseeing, but I had done all I needed to do, and it was barely noon! I felt that a walk to the Edo-Tokyo Museum was a good idea, even though I didn't really have a map, nor a good sense of how far it was... 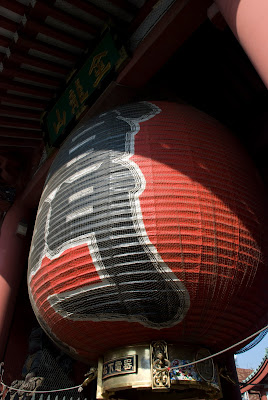 Posted by Travelingrant at 6:14 AM