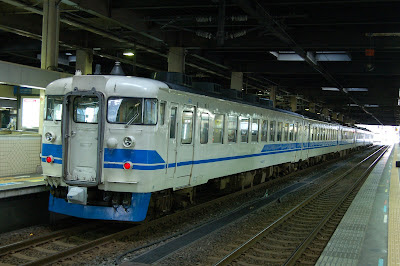 I leapt out of bed early Friday morning, eager to begin my journey home. I was so excited I had only slept about four hours that night... a fact that was soon to come back and haunt me.

A quick breakfast at McDonalds and I jumped on an early Thunderbird Express for Osaka. A mere three hours later I was in Osaka station where I caught the JR Airport Express, another hours journey by train. 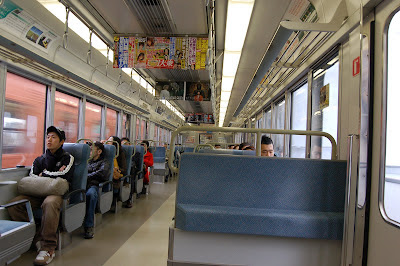 I met up with Zach in Kansai International Airport, he was there to welcome his friend Erica in from Hong Kong. We had a bit of sub-par Okonomiyaki for lunch, and then hung out a bit in the terminal, keeping me company before my flight. 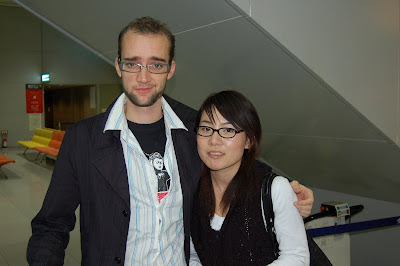 After I checked in and made it through security I noticed that the passengers could be broken up into 3 major groups. You had the tourists going home, the military guys going home, and a few English teachers like me... going home. When the boarding call came I practically bounced down the jetway to my seat. I was so thrilled to finally be on my way. 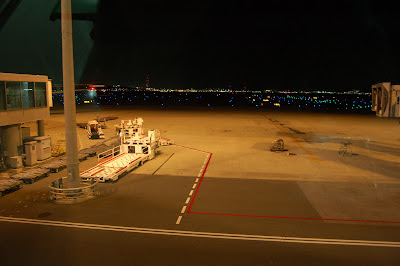 We landed uneventfully in Chicago, but here things started to unravel. While the arrival was 'on time' the pilot took his sweet time getting to the gate. I was off the plane like a shot, and made it through immigration with little trouble. But the baggage claim was... slow. Very slow. It took perhaps 35 or more minutes to get our bags, I can't say for certain as I had no watch. When I grabbed my bag, at last, and made it through customs, I had about 30 minutes or so to catch my flight. Tight, but not impossible. Or so I thought.

Chicago has one of the worst layouts for making an international-domestic connection. After going through immigration and customs you are forced out of the international terminal and into a train ride to the main terminal. There you are unceremoniously dumped into the general passenger population and required to wait in the regular security line just like everybody else. Add to this the fact that for some reason the boarding pass I got in Osaka wasn't valid, and I had to wait in the ticket line too. Oops. Suddenly that 30 minutes to catch the flight aren't looking so good.

Once I made it up to check in I was informed by the annoying little computer that I was too late to check in for this flight. No shit Sherlock, I just stood in line for 35 minutes. I used the customer service phone, and she told me I could go on standby and that there were three more flights to Denver that evening. No problems. But I have to go stand in the customer service line.

90 minutes later and my flight (45 min late departing) and the NEXT flight to Denver are both long gone. I finally get to the head of the line and get put on standby for the next next flight. Oh joy. Back through security and to the gate... where what do I see but the other 350 people on standby to Denver. Hmm they didn't mention *that* pertinant little detail. 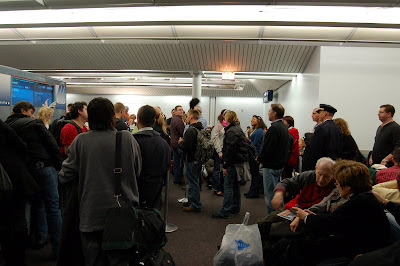 Some passengers had been waiting since Tuesday (it was now Friday evening, central time.) I know discovered at least part of the reason for the horrific United Customer Service. They wanted my seat to offer up to one of the poor saps who had been stranded because of the Denver Blizzard. DIA had only reopened a few hours earlier.

Needless to say, I was NOT high on the standby list. I watched the remaining flights leave with great dismay. I also noticed that one of the primary sources of seats for standby customers was missed international connections. I was soon joined in my misery by people flying from Copenhagen, London, and Moscow. Now I may be a bit biased, but it seems to me that people who have been flying for 8-12 hours should be afforded a little more courtesy.

As the group waited in line for some answer, any answer, on flights to Denver the next day we were all handed hotel vouchers... except that they weren't for a free hotel. Oh no, they were for "the cheapest rate available." Oh thank you sooo much United. Way to go the extra mile and help your customers. Faced with paying for a room as well as another flight in a mere six hours, many of the standbys, myself included, chose to stay the night in the terminal.

To be concluded.
Posted by Travelingrant at 9:57 AM

YOU were trying to make it through Denver? Ouch.