Odds and Ends of the Past Week 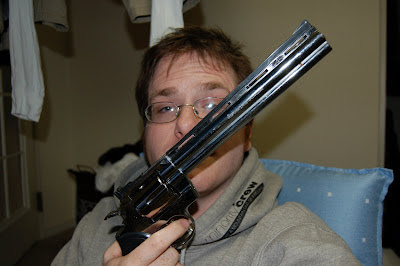 May you live in interesting times. Sheesh, I sure have been lately! Start with The Gun. My student got it for me for Christmas. Rarely have I received a gift that is so awesome yet so utterly useless. An 8 inch long replica Python .357 Magnum Lighter? I can just see me know, offering lights at the local bar. Talk about scaring away the ladies! I rather doubt I could ever sneak it back into the states either... too bad really.

I haven't been 100% well in over a month now, with two (minorish) trips to the hospital in the space of a bit over a week. First it was the same hacking cough that everybody in Ishikawa came down with at the end of November. I kicked that and then developed a rather unsightly case of contact dermatitis all over my face. One of my youngher students came in and remarked "What happened to your face?... Do you have chickenpox?" Two ointments and an oral antihistamine later and I was much improved. Japanese hospitals do love their drugs.

Then there was another quick cold, and then my eye started to hurt Monday. So yesterday I trekked back up to the hospital to have that looked at, fearing conjunctivitis (pinkeye). Except that there was no doctor who could see my eye (pun not entirely intended). I was moderatly incensed, it is only the Kanazawa Municiple Hospital, how could they not have a doctor who is qualified to at least take a look and give me some eyedrops? Alas I had to head back into town, where my wonderful manager took pity and escorted me to the eye clinic. A hefty bill later I had eyedrops and another ointment and a diagnosis: A somethingsomething cyst. "Take the drugs, should be gone in a week." Great. Thanks. 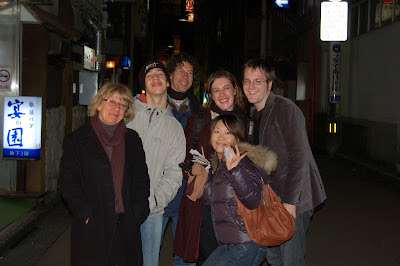 All has not been bad, my Aussie friend Anna's family is in town for a week or so, and we all squeezed into one of the local Okonomiyaki places. It was crowded, but awesome, as usual. Of course poor Anna is going a bit loopy(er) with her whole family here to cause grey hairs. I was lucky, I only had to deal with one family member at a time instead of three all at once! Eek. She's even had to give up her apartment, rooming with Julie above. Now that is dedication.

Less than 10 days before I visit Denver for Christmas. The first trip back to the USA in well over a year. This is going to be interesting. I just know I'm gonna use some random pointless Japanese while I'm there. I just hope I don't bow to the Pizza Delivery Man (thanks Az).
Posted by Travelingrant at 12:55 AM

PS- take your lighter around town. Ask people if they need a light. Go home rich.