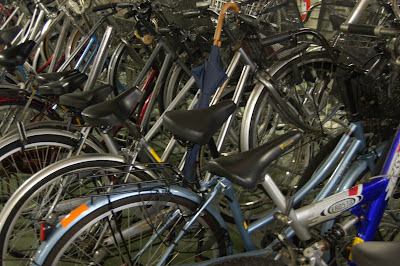 In Japan riding a bicycle on the street just isn't done. It's not technically illeagal, but it is rather rare. To be fair, it is dangerous enough being on the sidewalk, which provides no barrier to the determined motorist. To ride in the street would be akin to suicide!

That said, riding on the sidewalk is an imperfect solution, at best. Afterall one of Japan's best known attributes is the rather large population, many of whom often seem to be milling about between your average cyclists start point and destination. This randomly moving obstacle course can tax even the best of reflexes, especially since you have to go through at top speed!

Now there are a few schools of thought on how to properly negotiate the sidewalks of Japan. The old-school response is to trundle along at a medium speed ringing your bell every five feet. While this does ensure a clear path it is also sure to annoy everybody in the area. The youngsters response is to barrel along at top speed and trust in God/ Buddha/ Shinto deity of choice to keep them safe at the end of their journey.

I have chosen a middle ground, a combination of speed, maneuverability, and judicious use of the bell. It works pretty well but I have to say I'm appalled at the lack of spatial awareness of the Kanaawa pedestrians. When I'm on foot I keep a weather eye out for people coming up behind at high speeds, but most people simple don't even think about it. This leads to a lot of stopping in the middle of traffic for any reason, a window sale, a crepe, friends, to break wind, streach, or anything else! This stopping is quickly followed by me ringing my bell like mad and gyrating clear so as not to flatten the poor soul.

Some months ago Mo and I were riding down a very broad sidewalk that could have easily accomodated 5-6 people abreast. Three little old ladies were walking in such a way as to block the whole sidewalk. There was absolutly no place for a bike to go, so I slowed way down, rang my bell and waited. And waited. Finally I detoured into the street, which got the ladies attention, and she got over and made a space, too late for me to use of course. But it gets better, as Mo came up, ringing her bell, the lady... got back over and closed the gap that Mo was seconds away from! Luckily Mo made it clear, but that lady almost got taken out, despite everything we did to make our presence know. And who do you think got a dose of Japanese invective? *sigh*

I've also had an opposite reaction. Some weeks ago I was tooling along at a nice slow pace, and rang my bell to alert to schoolboys who were blocking the sidewalk. One of them looked back at me and then leapt clear in a motion that can only be described as panicky. I wasn't going at anywhere near top speed, and I can't think of any panic instilling circumstances other than crazed American on a bike. Ah well. I'd rather have panic than blissful ignorance.
Posted by Travelingrant at 10:59 AM

Did this come out of the "Spatial Awareness" thread?

Just another reason why I want to install machine guns on my handlebars ...

I was pondering it before I read that, but at least it proved that this was NOT an isolated occurence.

I like the last line: "You should KNOW that a bicyclist near you will suddenly turn and cut across traffic!"