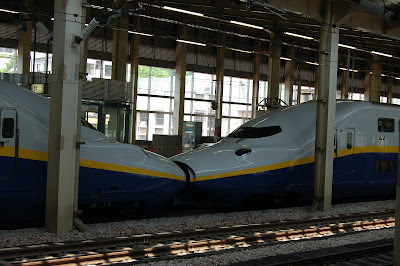 To celebrate my Birthday, and get out of Tokyo for a while, Sachiko and I decided to go to Kamakura, a very pleasant seaside resort town about one hour south of Tokyo. I couldn't take the night bus because of timing issues, so I 'had to' ride the Shinkansen for the first time in almost a year. I love the shink. Though the Hakutaka limited express from Kanazawa to the transfer station was a bit trying. It was an early train (7:09) and most people wanted to sleep, well except for this one 70+ old lady who was literally bouncing off the walls like a caffeinated squirrel. It was like she was 5! 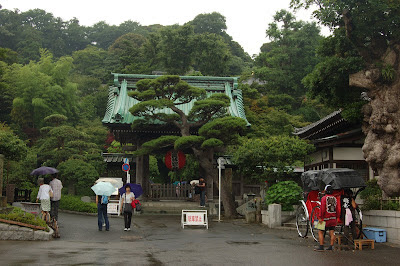 Kamakura itself was glorious. Nestled between a pair of ridges, with a third smaller set of hills bisecting the town, the whole area is drenched in green. It is a very nice contrast the Blade Runner aesthetic of Shinjuku. We spent the first day kicking back on the beach, its still the rainy season, so it was a little cool for beach going, but not too bad. Certainly, the water was a lot warmer than it is off the coast of Mendocino county! We saw a lot of sea life, tiny clams, a crab, a jelly fish, some fish in the water, and even some worms living on a plank that had washed a shore. 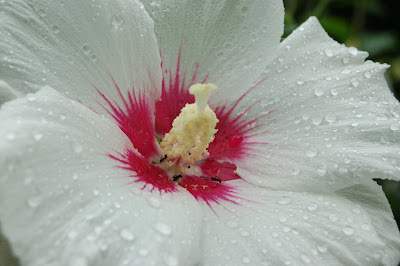 After a delicious, and huge, dinner of Yaki-niku we meandered down the beach at night, a pleasant cap to a fantastic day. The next day dawned... dark and stormy. Perhaps not stormy, but it was certainly raining. Despite the rain, we had a great time checking out Hase-dera, a famous Kamakura temple with a huge statue of Kannon, Buddhist deity of mercy. The gardens surrounding the temple were amazing, some of the best I've seen. Waterfalls, caves, ponds, paths, bamboo, everything you could want in a Japanese garden. 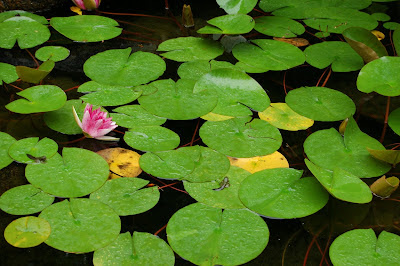 Even tadpoles who are half frog, or is it frogs who are half tadpole? I had never seen this intermediate stage before, so I thought that was pretty neat. 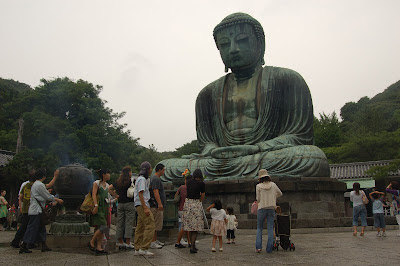 The next stop was the Daibutsu, a giant Buddha statue built in 1252 during the Kamakura Shogunate, a brief period when Kamakura was a major political and military force in Japan. This smaller statue was inspired by the truly massive statue in Nara and is a mere 13.35 meters tall, compared with the Todai-ji statue at 16 meters. The Kamakura Daibutsu used to be indoors, in a grand hall similar to the one in Nara, but in 1495 a tsunami swept away the hall, leaving the 93 ton bronze statue unharmed! 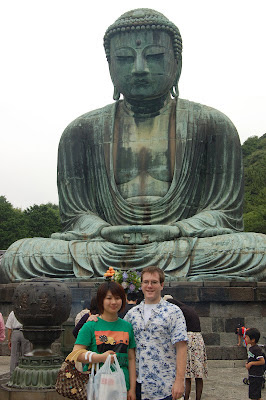 That's a nice girl you got there Grant. I notice she's carrying both of your umbrellas, her own purse and a bag of your snacks. That way you can keep both your hands free to swat at mosquito's right?

Wow, when that first picture loaded, I thought that something had crushed part of a train!

I heard there was another big earthquake off of Noto today... was it big in Kanazawa?

Naw, it wasn't too bad in Kanazawa. We certainly felt it though. Now Niigata Prefecture got hit pretty hard though!