Another Year Older and Deeper in Debt... 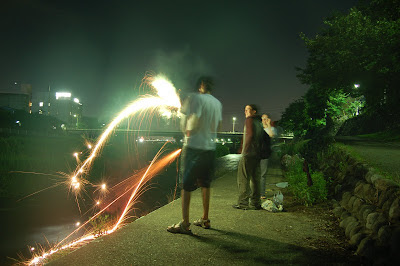 Life is what happens when you are making other plans. -John Lennon

Yeah, it is a rather cliché quote, but it does accurately sum up my situation. Birthdays are usually a time to reflect on the year before, a day we can really mark the passing of time. As I sit and ponder, I realize that Everything Has Changed, Again.

Now obviously, on July 4th 2006 I expected and embraced changed. After all, the year before I had elected to move all the way across the world to Japan. I KNEW that my life would be altered in ways I couldn't even comprehend.

But, this year, I'm still in the same country, the same city, and even the same job. Yet everything else has changed. Out of three coworkers, two are new, I have a new apartment, a new girlfriend, and a raft of new friends. In fact, since Liz has to work late, there will be NO overlap between the attendance at last years party and this years. In one year, almost everybody left.

I'm not getting all emo though, just, pondering. Pondering my past, and my future.

Happy Independence Day everybody!
Posted by Travelingrant at 9:46 AM

(post more pictures. I want to see the one of Michael firing fireworks over my head...)

Your title led me to think it would address the explosion of the national debt of the U.S.A., certainly a worthy topic for someone of your generation who will inherit it...