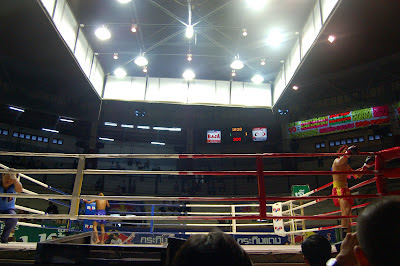 While in Thailand, it only makes sense to check out the national sport, Muay Thai, otherwise known as Thai Kickboxing. Luckily for me, there are Muay Thai fights somewhere in Bangkok every night of the week. 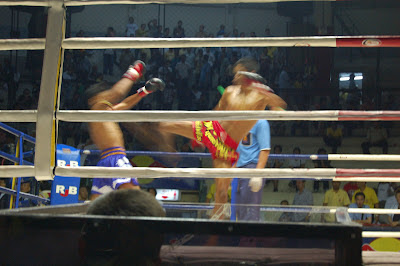 Wednesday night fights are hosted at Ratchadamnoen Stadium, a short walk from my hotel. The lineup was a total of 10 fights, with the eighth being the nights main event. 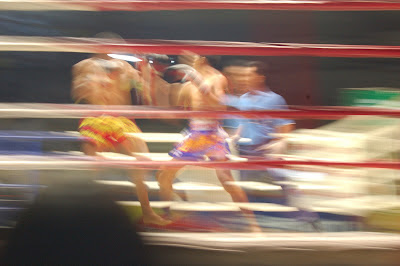 I was shocked at the sheer viciousness of these fights. This isn't slow moving American boxing. The fighters wade in quickly, hitting with anything they can. Fists, feet, elbows, knees. Anything. 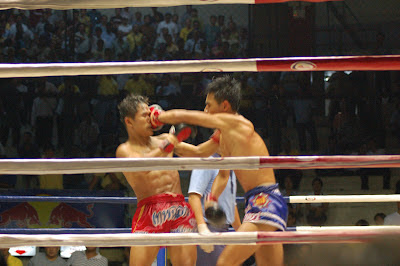 With my pleasant ringside seat, I could hear every thwack and smack as hard bits of flesh impacted slightly softer bits. I had a perfect view of one poor unfortunate who got a cut on his forehead that reopened every subsequent round, sending blood pouring down his face. 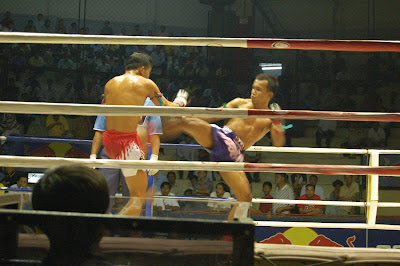 Each fight lasted 5 rounds of three minutes each, with two minute intermissions between rounds. Well, 5 rounds, unless say you got knocked out in the second round! With ten fights total, thats a lot people smacking that everliving crap out of each other. 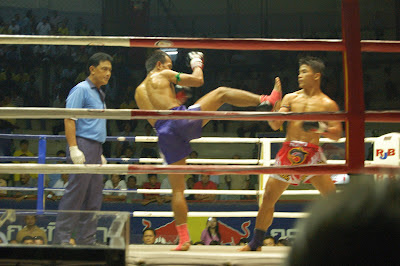 I was more than happy to leave after the main event, of course I had to have my picture snapped with the winner first! All in all it was very interesting experience. I certainly enjoyed it, but I can't say I'm eager to repeat it. Theres just something so brutal about the sport, and boxing in general that I can't quite get behind. 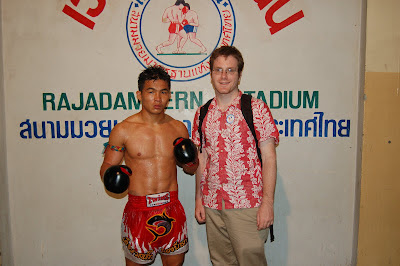 Posted by Travelingrant at 10:05 PM

Wow Grant, you've been working out. Who's the guy in the Hawaiian shirt?

I must add that you are looking rather intrepid standing next to the fierce fighter.