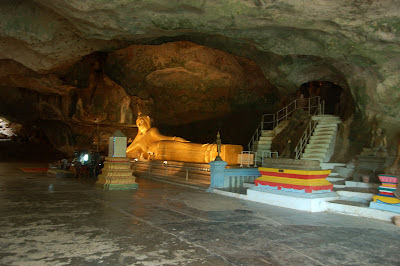 In the 1974 film The Man with the Golden Gun Christopher Lee's cultured assassin Francisco Scaramanga menaced James Bond from a secret island lair. That lair is actually Khao Tapu, an island located to the north of Phuket. 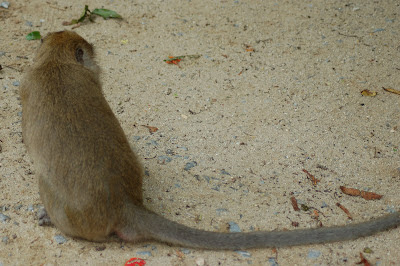 There are many tours that offer a view of this slice of movie magic, and most of them offer a bit more than just the puny island. Our tour started at Suwankuha Temple, a Buddist temple embedded in an impressive little cave. Outside of the cave were dozens of excessively cute monkeys, but the low light caused by the overcast weather made getting a good close up difficult. I have many many pictures that are 'almost' amazing. 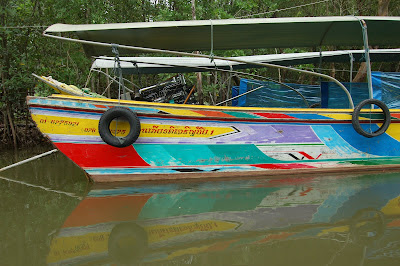 The cave itself was filled with Buddhist statuary and bats, both of which I find fairly interesting. Though after living in Japan for so long, I'll admit that Buddhist statuary is becoming passé for a tourist attraction. The bats were cut though. After leaving the cave the tour bus rendezvoused with a few others and our groups boarded a 'long tail' boat, so called because of the long propeller shaft sticking out of the back of the boat. 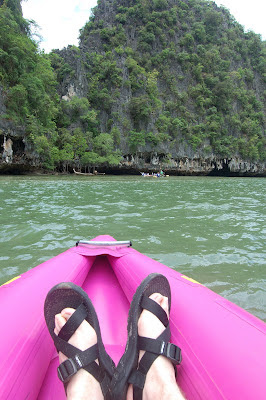 These flat bottomed boats are perfect for navigating the estuaries, mangrove swamps, and island chains that make up Phang Nga Bay National Park. Our first stop was a collection of sea caves. We all boarded colorful inflatable sea kayaks, and then were chauffeured around the spectacular rock formations and mudskipper infested swamps. 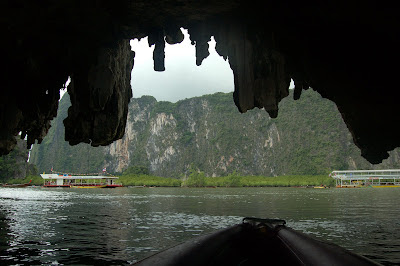 Next up on the itinerary was a visit to James Bond Island itself, but to our misfortune the sky morphed from merely overcast to pouring rain. 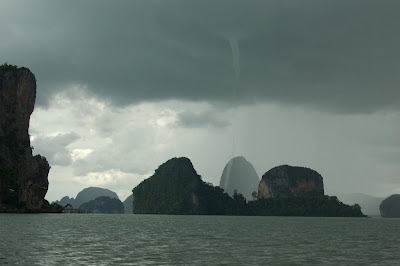 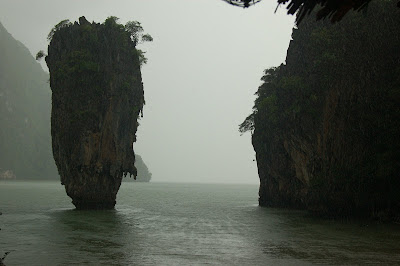 Unluckily once we got the island the rain went from pouring to drenching. We clustered under an awning and took pictures of tiny little 'nail island' in all its rain shrouded glory. I don't think the famously tall Christopher Lee would fit! Alas, movie magic is shown to be all smoke and mirrors. 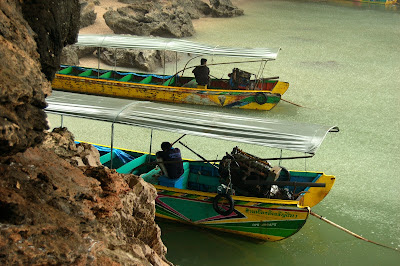 We cut our stop short, as the tropical rain was in no mood to dissipate anytime soon, and it was way past lunch time. Lunch was at a restaurant in the village of Koh Panyee. 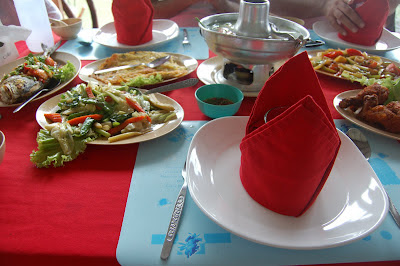 Koh Panyee is worthy as a tourist stop because it is built entirely on piles driven into the shallow mud. The islands that dot Phang Nga Bay are often too sheer to build much on, and the same is true here, so the island is used as a wind break and an anchor to hold the ramshackle fishing village. 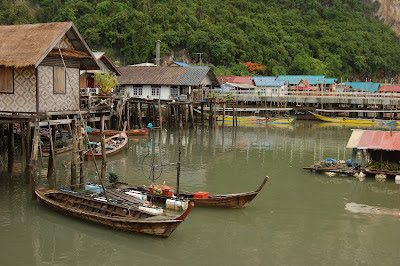 The market and the mosque presented the primary attractions, once the delicious course lunch had been consumed. The rain had let up a little bit by the time we left, so the journey back wasn't quite as wet and dripping. 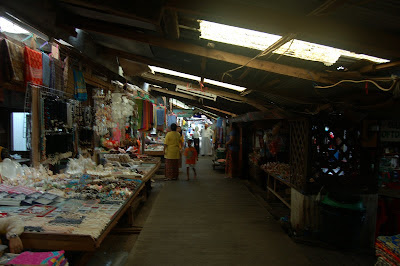 Once back at the hotel I decided that after such a strenuous day of travel I need a reward! Having never had a professional massage, I figured that now was as good a time as any, being in the land of the cheap, high quality massage. The hotel had a spa area in the back with a barber shop for hair extensions, manicure and pedicure facilities and of course massage rooms. I was pretty tired, but the thing that really stuck out was the strange sounds made as the masseuse popped my toes. I didn't think feet were supposed to make noises like that. The massage was certainly very relaxing, my muscles were pretty sore, both from the days travels and just generally walking around with a heavy backpack and camera.

With that, my busy seconds full day ended, and I drifted off to sleep very rapidly.
Posted by Travelingrant at 1:00 AM

I make a motion for more food pictures... Do I heard a second?

I second that. Thai food always gets stuck in my beard.

Whoa, waterspouts. That is awesome.