When I came to Japan in March I had been told I was going to Ibaraki Prefecture, and so I did a lot of research. Of course I was eventually placed in Gunma, but I still have several good friends in Ibaraki that I did training with. One of them invited me to climb Mt. Tsukuba as a prelude hike to Mt. Fuji, which we hope to climb in August. My day started pretty early to make it to Ibaraki by 11, and it included travel on this one car diesel train, a rarity in the generally electrified grid of Japanese rail. 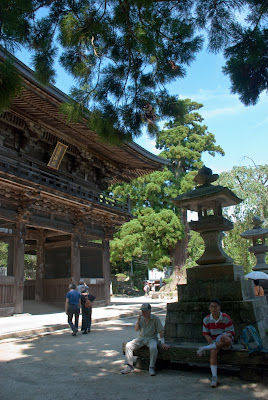 Mountains are often sacred to Shinto, and Tsukuba-san is no different. There is a beautiful large shrine at the base of the peak, and the trails start from there. 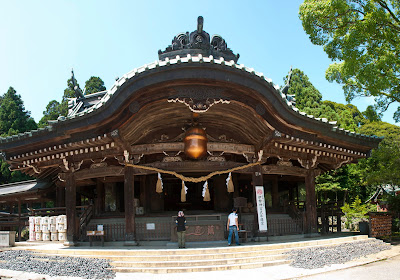 It has been a while since I had done much hiking, and for most of our group this was their first hike. We weren't quite prepared, especially water wise. Luckily one of us had brought a fair amount of extra water, so those of us who had only packed a little bit were saved. I really should (and do) know better, but I wasn't quite prepared for how the heat and humidity of Japanese summer affects hiking. To put it briefly, you sweat, a lot. I've now learned that any hike in Japan had better be accompanied by a small towel around your neck to absorb the sweat pouring off your face. 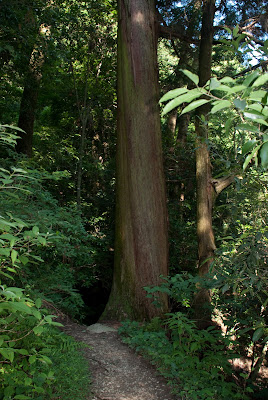 Despite the heat and the sweat, the hike was lovely. I had almost forgotten just how much I love hiking. The lush green forests were a remarkable contrast to the dry pine forests and wide open fields of the Rocky Mountains. The trail was also quite busy, but mostly with people coming down the peak after riding the cable car to the top!

As always once we got to the top all the work it took was forgotten as we looked out over the flatlands of Ibaraki Prefecture. Unlike most Colorado Mountains, there were vending machines, a restaurant, and a gift shop up top, so we had plenty to amuse ourselves with other than the view! 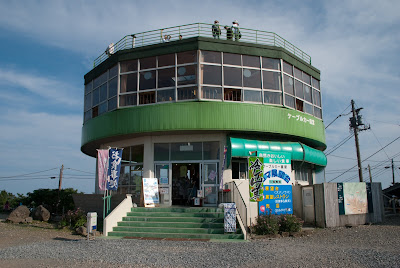 Though I must confess, we didn't actually make it to the TOP, rather we made it a large saddle that is between Tsukuba-san's two peaks. We were up very late in the day (5:00), and had to head down to avoid hiking down in the dark, as we were utterly unprepared for that. I suppose that means I have unfinished business in Ibaraki Prefecture, and I may just have to head back and make it to the top of BOTH peaks, and not take the cable car down next time....

Posted by Travelingrant at 8:56 PM

The pic of the trail head looked jungle-hot. What was your elevation gain? And weight loss due to dehydration? I bet you sweat as much in the Rockies, it just doesn't rill down into your socks because of the 15%humidity. I do not suppose there were vending machines at the false summit for Lagunitas Pils?

Those hikers coming DOWN must have figured the gaijin were just doing things backwards as usual: hiking up and taking the cable car down!

Good question on the elevation gain, I'm not sure. The peak itself is about 2,877 Ft above sea level, so probably about 1,500 feet elevation gain? Or about that, I do know we went UP, always UP. Alas, no Lagunitas, though they did have Asahi... :-)