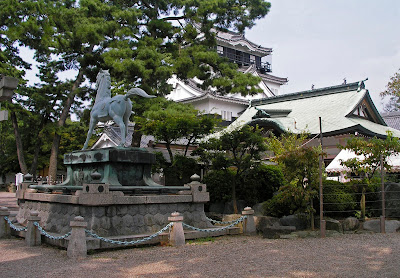 When browsing for English books on Japan, you will find a great many that cover recent Japanese history. Reams have been written about the fall of the Tokugawa Shogunate, the Meiji Restoration, World War II and the course of Modern Japan. You can also find plenty of books that cover general historical topics like samurai or castles. However, I have had a hard time finding a book that zeros in on the details of the reunification of Japan and the rise of the Tokugawa Shogunate in the late 16th and early 17th centuries.
Ever since I read James Clavell's Shogun I have wanted to read an actual history about the three great unifiers, Oda Nobunaga, Toyotomi Hideyoshi, and of course Tokugawa Ieyasu. While I haven't found a book that fulfills that criteria, a friend pointed me towards this book, Tokugawa Ieyasu: Shogun by Conrad Totman.  In a brisk 197 pages the book concentrates on Ieyasu's life from about 1599, and his successful reunification of Japan through diplomacy and force. We see the diplomatic acrobatics that he used to build an maintain his power base, as well as the ruthlessness of the time. If a letter or a new wife wouldn't sway you to Tokugawa's way of thinking, a sword probably would, though of course by then it was too late.
The book flits about geographically quite a bit, and it was fun for me as many places I know popped up in the text. Tokugawa was born in the castle town of Okazaki, which of course was where I worked back in September of 2005. The books also spends a fair amount of time in the Kansai region, especially the cities of Osaka and Kyoto. Edo (Tokyo) gets a fair amount of words as well as Totman describes the cities development from a muddy village to the base of the most powerful family in Japan. Kanazawa gets a few mentions as well as some areas I know near to Ogo!
Really the only problem with the book is one rather inherent in Japanese History generally, names. The major daimyo (feudal lords) of the era all crop up rather often, as do their sons, grandsons, cousins, brothers, and more. Throw in shifting alliances, a multitude of wives and a plethora of children and sometimes it can be hard to figure out just who is doing what.
That said, this really is an excellent introduction to a very complex and fascinating period in history.
Posted by Travelingrant at 11:50 AM

Totman also wrote a survey-style text, "Early Modern Japan", that I read for a history class:
http://books.google.com/books?id=Mb7Zp3LF-VAC
(you can read what looks to be the whole thing using their preview function)

It's not heavy on narrative or biographies, but it brings in a lot of contexts that I found helpful. And surveys' bibliographies are usually a good way to find the books on the parts you're into the most.