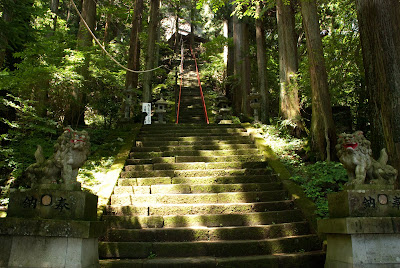 Mt. Myōgi is one of the three Mountains of Jomo (Gunma), along with Mt. Haruna and Mt. Akagi. It is the furthest away from me, and the final one that I visited. After our group had so much fun on Mt. Tsukuba, we decided to tackle another hike the next weekend. 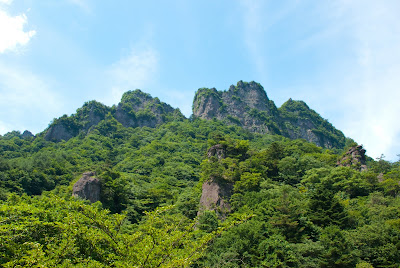 Like Akagi and Haruna, Myōgi is of volcanic origin, though it is far, far older than its two sister peaks. The massif is long extinct, and heavily eroded. Myōgi has no graceful hump, but instead a chaotic mass of spires and ridges, perfect for the adventurous rock scrambler.

There are ladders and chains to hold on to for the tricky parts, though I'll admit even the ladder up to this spire was a bit too exposed and a tad slick for my tastes, though I made it safe and sound. We got an excellent group panorama, and then headed further up the mountain for more scrambling and more vistas. 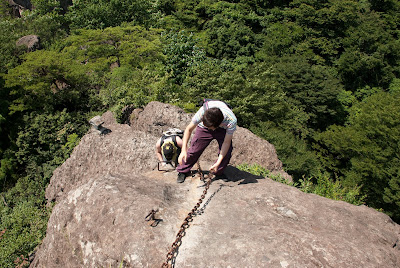 The climb wasn't technical, but it did demand a sure foot and a steady hand.  The heat and humidity conspired to make my hands pretty slick, and while this section was no problem, there was a pretty sheer face later on that had me a little worried, with steep,  slick rocks and wet hands.

The views we were rewarded with were far more expansive than those on Tsukuba, though the hiking was much more strenuous, as a few of the party were quick to point out! 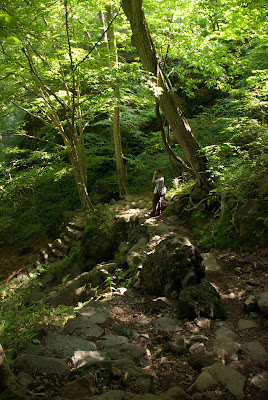 I'd learned my lessons from Tsukuba, and had stocked a face towel for sweat and a pair of two liter water bottles from the store, though I found that a pair of hiking boots would have been fantastic to have on hand, especially for the steeper bits of rock scrambling. Despite the heat, humidity, and angry wasps I've fallen even more in love with hiking in Japan, and a return to Myōgi to climb a little higher is certainly in order, as are further vertical exploits. Fuji, here we come!
Posted by Travelingrant at 8:32 PM

The right equipment is more important for hiking and climbing than any amount of enthusiasm.

I just bought myself some new hiking boots...haven't tried them out yet. I do like the tree cover shown which at least provides some shade. Unlike most of our hikes here.