Maui is formed from two ancient shield volcanoes, West Maui and Haleakalā. Haleakalā is the younger volcano, and is far less eroded than West Maui, as we saw when we visited Iao valley. The Hawaiian shield volcanoes, so called because of their broad, shallow slopes that resemble a warriors shield placed on the ground, have a definite pattern in their journey away from the Hawaiian hot spot, and Maui is a perfect illustration of where the Big Island is going, and where Oahu has been. 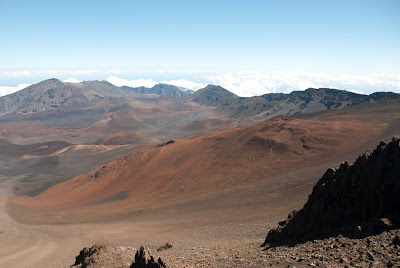 The shield volcanoes born on the Hawaiian hot spot are built with large flows of very fluid basalt magma. These initial stages create the islands very fast, geologically speaking. A prime example of the shield building phase is Kilauea, on the Big Island, which has been erupting continuously since 1983. As the island moves away from the hot spot the composition of the lava changes, becoming more viscous and the color changes from a shiny black to a more dull brown. This means the volcano has entered the Late Stage of Hawaiian vulcanism. Haulalai, on the Big Island, is an example of a volcano in the late stages, still erupting, but less frequently. 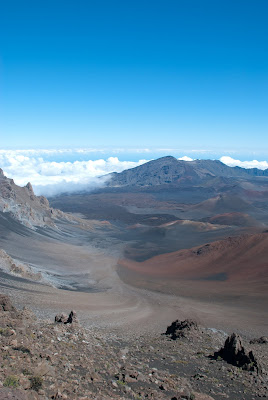 When visitors drive up to the summit of Haleakalā at 10,023 feet above sea level, they look down into what looks like the old summit caldera, but looks are a bit deceiving. What you see in these photos is the heavily eroded remains of the ancient summit of Haleakalā. Two large valleys used to cut through this area, however late stage eruptions filled the valleys with lava, creating the modern summit basin. You can see the difference in the original darker basalt and the later more reddish alkalic basalts that filled the valleys. Haleakalā is a prime example of the final stage of a shield volcano, the rejuvenated stage. Here you have smaller eruptions that form distinct cinder cones and spatter cones like Diamond Head or Punchbowl on Oahu. On Maui, the late stage eruptions have long fallen silent, but there is still some activity along the flanks, with the most recent lava dating from sometime in the 16th century. While eruptions are rare in the rejuvenated stage, there is certainly no reason to think that Haleakalā will keep sleeping, it is only a matter of time before it erupts again. 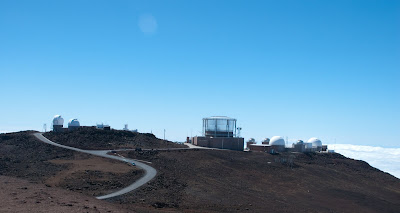 While the 10,023 feet summit of Haleakalā isn't as impressive as Mauna Kea's 13,803 feet above sea level, it too provides an excellent place for an observatory. The US military operates here, keeping track of every object in earth orbit, which seems a rather daunting task!

Looking to the east from the summit, you can see the peaks of the Big Island peeking above the clouds. While the drive to Haleakalā National Park is twisty and steep, the views alone are worth it. Combine the fantastic views with fascinating geology, and you have a Maui must see. 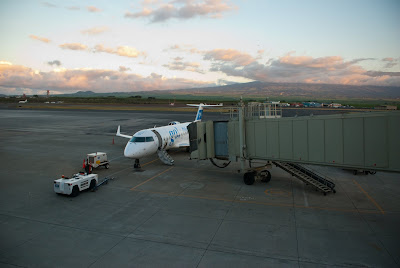 Looking back towards Haleakalā from Kahalui airport, you can see the broad "shield" shape. The summit itself is obscured by clouds, but from the bottom it just doesn't seem as high as it really is. I've climbed a lot of mountains in Colorado, but for us, being at 10,000 feet mean a view of only 5,000 feet back down to the Great Plains, at best. At Haleakalā, being on top is like being perched on the top of the world, seeing back down all 10,023 of those feet to sea level.
Posted by Travelingrant at 3:09 AM