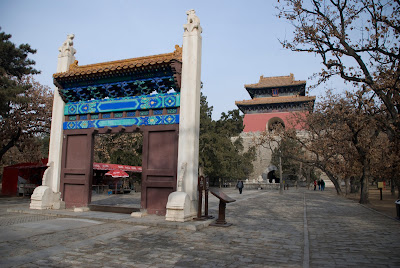 High on the list of any visitor to Beijing, or even China in general, is the so called Great Wall of China. Being interested in history, architecture and fun things like that, there was no chance that I would miss a trip out to the wall covered hills and ridges north of Beijing. The easiest way to make the trip is to book a tour through your hotel, and don't forget to bargain the price down a bit! After driving all over Beijing to pick up the travelers our first stop was the Ming Tombs a bit north of the city. After the Ming Dynasty moved the capital to Beijing the emperors built large, lavish tombs in an area of excellent feng sui. 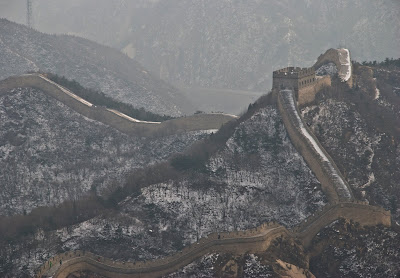 The tomb we visited was certainly interesting, but what we all really came for was the wall itself, or at least the portion of it at Badaling. The Badaling section of the Great Wall is one of several that have been restored for tourists, and is the most popular. While popular means crowds, the chill November weather helped the crowd control, and the wall is so large and steep that relatively few people walk much beyond the gondola drop off point. 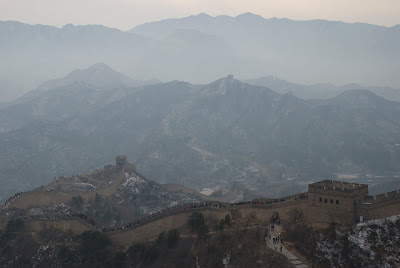 I prepared for the excursion by reading The Great Wall by John Man. His attempts to trace the wall through both reality and popular imagination were most illuminating. We all know two things about the wall, that it can be seen from space, and that it was built by the first Qin Emperor who united China in 221 BC. 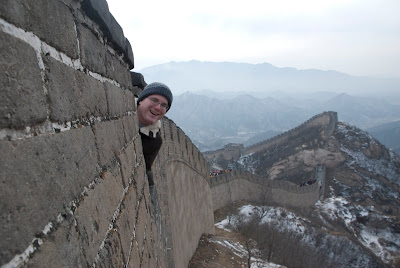 Well you know what they say, everything you know is wrong, and both of those facts are wrong. You can't see the wall from space with the naked eye, and while the Qin empire did build a great wall, they didn't build the massive and imposing edifice that we tourists love to take pictures of. That was built by the Ming dynasty to protect their new capital from Mongolian and Manchu raiders in the late 1400s.

The original Great Wall was built of rammed earth, and little of it has survived the passage of over two millenniums. In fact, there are many different walls built over the years by the various dynasties of China to keep out tribes of nomadic horsemen, the Ming example being only the best preserved and the most recent.

Once I made it to the wall though, any academic discussion was moot. Seeing the sinuous winding of the stone rampart over ridges and hilltops as far as the eye could see was an utterly unique experience. After walking through the Forbidden City, and hiking up and down the steep steps of The Great Wall, I can say with confidence that the Ming emperors thought big, and built big. 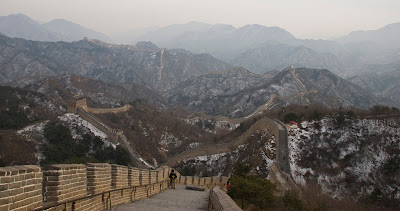 I teamed up with two other fellow travelers from my tour and we hiked down to the watchtower you see here. The hike down was rough, but the hike up almost killed me. Despite coming from the high mountains of Colorado, trying to pull myself up the slope from that tower was exhausting. It really made you respect the soldiers who patrolled in the area, and the poor laborers who had to build the wall in the first place. The best part of the day was the end, when myself and my two new traveling companions went out for a lavish late Thanksgiving dinner of Peking Duck that surpassed any expectations I might have had. If any readers find themselves in Beijing desiring some roast duck, I highly recommend the Dadong restaurant, of which there are several around the city. 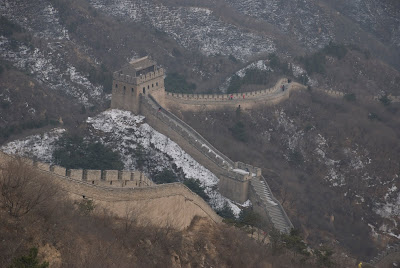 Posted by Travelingrant at 3:30 AM

You really get a sense of the scope of the Great Wall from your photos and descriptions. Nice job. AND how cold it was.

Nobody who's ever been hasn't been impressed.

Right? None of this "I thought it would be bigger" stuff!

Nice pics. Huang Pu River was the significantly famed street in Asia with key Far East firms having their head offices in the sea- facing buildings.TV Tower is presently the highest building in Shanghai and Asia with its unique design. Don 't fail to visit Tv towers panoramic view of Shanghai, Snake Mount, Chongmin Island and the Yangtze River.