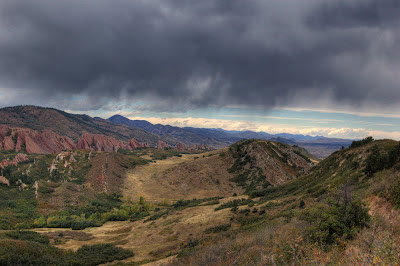 If there was one 'thing' besides enchiladas that I missed while living in Kanazawa, it was the Rocky Mountains. While the views of the Southern Japan Alps were very pretty, they just weren't quite as impressive as the glorious peaks that form the backbone of North America. While I haven't had a chance to take off and enjoy the really high peaks yet, since snow has already dusted them, Matt and I did have an opportunity to go to one of my favorite nearby areas. 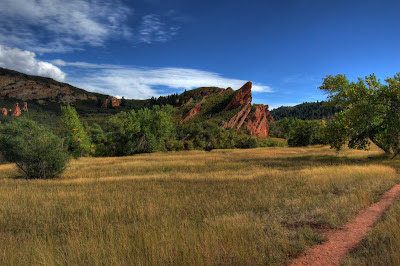 Roxborough State Park is a beautiful collection of trails winding around and through fantastic examples of the red sandstone rocks of the Fountain Formation. This group of rocks was formed by the erosion of an ancient mountain range called "The Ancestral Rocky Mountains." The uplift of the current peaks broke and tilted the rocks into the fantastic shapes that form Roxbourough, as well as the Garden of the Gods in Colorado Springs and Red Rocks Amphitheater in nearby Morrison Colorado. 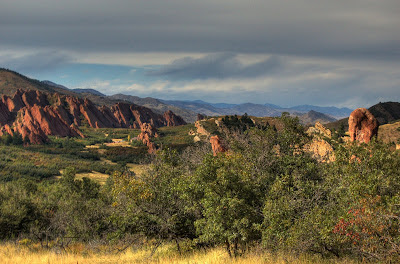 I myself have a pretty long history with the park. One of my grade school birthday parties was held there. We froze our water bottles to keep them cool in the hot July sun, but while it was VERY hot and sunny, it wasn't hot and sunny enough to melt the several quarts of ice we brought along. Luckily we didn't hike very far, but man were we a thirsty group when we got back to the visitors center. I also did my Eagle Scout project at Roxborough, cleaning up a field that had been used as a convenient garbage dump for the locals. 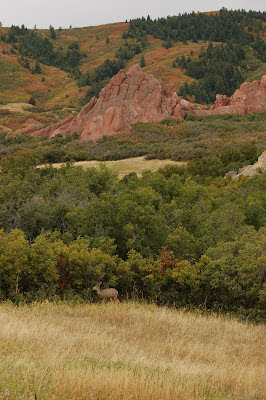 While it may lack that rugged and epic vistas of a high peak along the continental divide, Roxborough will always be one of my favorite areas in Colorado, and I suppose it is pretty fitting that it was one of the first things I did when I got back in the States.
Posted by Travelingrant at 4:05 AM

That first photo is great!

I don't get down that way nearly enough. We tend to go down to Castlewood, which isn't nearly as pretty, but it's closer to us.

I remember Freshman year of college a group of people were going hiking (14er or 13ers, if I remember correctly), it was a club and someone wanted me to join. I remember thinking.....they've got to be crazy....I admire the mountains from Aurora....there are many miles to separate us. :-) You may have been apart of that group or remember it as well....either way a random sidebar....my sister and I climbed Mt. Sherman this year (you may have read my blogs about it and if you haven't, you should, over at jennyjeanmc.wordpress.com), one of the best experiences of my life and one that is hard to explain why it's so good. You understand what I'm saying, at least I hope you do. :-)

I do understand, and I do remember! It was the Honors Club, and we put together a 13er climb. Only 3 people went, but it was a fun trip. Hiking rocks!