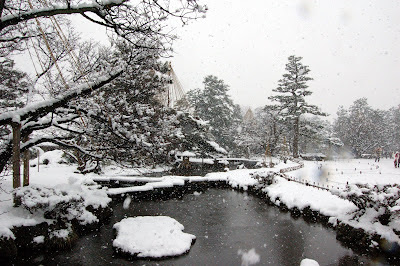 While I was at Kenrokuen on Wednesday I was looking down at one of the shallow streams and saw what looked like small, fast moving fish. Looking closer I realized that these little shapes weren't fish at all, but the short lived shadows of snowflakes on the bottom. If a snowflake is an expression of impermanence, then what of the snowflakes shadow? The ultimate in change and renewal? Every shadow lasted for less than a second, but there was a constantly replenished supply, thousands upon thousands falling from the sky.

I bring this up because of my own thoughts about life, my life, and my place in the grand scheme of things. Obviously the major crisis is again, do I stay in Japan? Now I'm sure everybody whom I've told that I'm not staying are right now saying "What the..?!?!" I haven't reneged on my decision to return home, but that doesn't mean that its an easy decision to make. As I noted in January, against all odds Kanazawa is a home to me now. Perhaps not The Home, but it is still A Home, and as such it will be very hard to leave. Even Anna, who did not have a good work experience, had a hard time leaving, and how much harder will it be for myself?

I think the key part of my decision to leave Japan now is the built in impermanence of an English teachers life here. Small apartments, yearly contracts, an ever renewing circle of friends as people come and go, and little chance for a real career, nothing really screams "Stay!", and so most don't. The ones that do, well I can't say for sure, but I think it takes a toll. I certainly have no real ties here, so I have no real reason aside sentiment to stay. But that doesn't mean it won't be hard.

Another thing I've been pondering, is What Next. This is obviously tied in with the stay or go problem, but irregardless of that choice I have to start mapping out my future. Or maybe I don't. I think I have to stop defining my life based on other peoples experiences, but really what else do I have to base my decisions on? It would be so much easier if I could say "I want this
" and then work towards that goal, but I have absolutely no idea what I want! Not wanting to stay in Japan for a third year is a far cry from knowing where/ what I want to go/ do next.

Part of me longs to continue traveling, I have had so much fun, and learned so much about myself, and others, in my time in Japan, but part of me longs for a sense of permanence. A home I don't mind decorating. Friends who won't leave in a few months, the stuff that everybody else takes for granted. I suppose my best bet is to head home to Denver, settle in for a bit, and see if my wanderlust has abated or not.

So there you go, the questions that keep Grant up at night, among others. 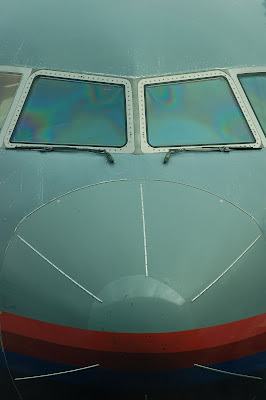 Posted by Travelingrant at 3:43 PM