The Third Most Beautiful Festival In Japan

Why is that everything in Japan has been broken down into the top three? The top three gardens, beautiful views, festivals... According to whom? Well despite that, I'll admit that the Takayama Fall festival, what I saw of it, was indeed beautiful. It was also just a tad crowded. 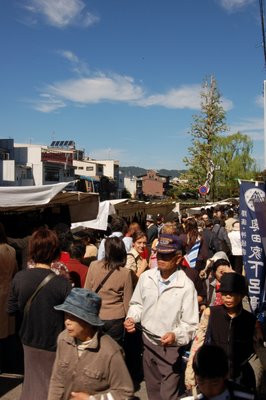 Our first stop back in town was to swing by the morning market. I really wish Kanazawa had a nice riverside market like this every morning. The scenery and the wares on sale really complemented each other quite nicely. A good old-fashioned Farmer's Market! Well being it was festival day, it was a good, old-fashioned, overpopulated Farmer's Market! 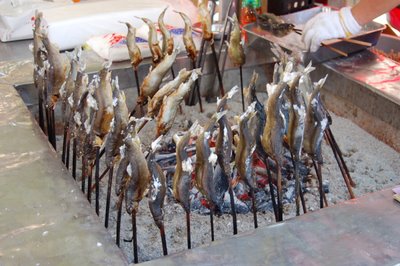 Want a Fish on a Stick? 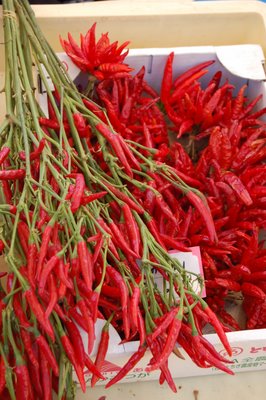 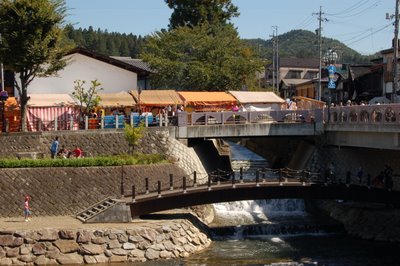 Next to the market the festival vendors had set up all their booths. I really, really love Japanese festival food. The supply of yakisoba, yakitori, shaved ice, chocolate covered bananas, steak skewers, chicken gyros, okonomiyaki... wait a minute, chicken gyros!? Luckily for my tastebuds there were a pair of authentic Turks dishing out some truly delectable pita breads stuffed with roasted chicken breasts. It was amazing. The Takayama specialty steak skewers were pretty nice as well, tender and juicy. 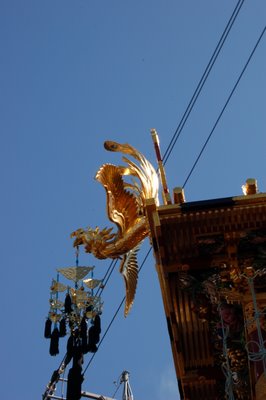 The real highpoint of the festival is the collection of floats. Now, for Takayama they have broken their festival up into Spring and Fall halves, and each half has its own floats. On the festival day they line the floats up for a few hours and let people take get up nice and close, then they parade around the streets. However, the real thrill comes at night when the floats are bedecked with lanterns and once again go on parade. Sadly both Anna and I had to work the next day, and couldn't stay for the night parade. 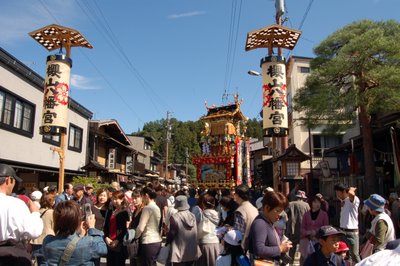 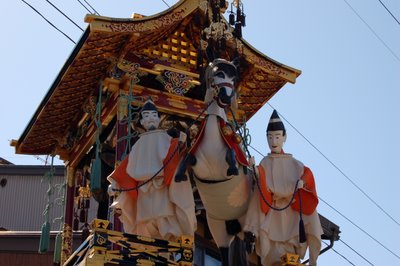 The floats were amazing, you could tell that a lot of time, effort, and talent had gone into their construction. It was too bad then that the whole area was just so insanely crowded. The crush of people was pretty intense, and the clicks, flashes, buzzes and whirrs from all the cameras, and camera phones, was seriously annoying. Everybody, including me, was jockying for position, and it was almost impossible to get a clear line of sight. Just as it was almost impossible to avoid being run over/ elbowed/ having your toes trod on by some crazed old lady in Festival Fever. *sigh* 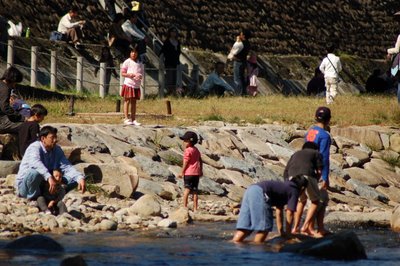 The crazy crowd made sitting by the river and soaking up the autumn sun a popular option. The weather was glorious, the snacks delicious, and the din of the mob dampened. While there were plenty of families and groups enjoying the moment, there were far fewer than the slavering horde on the road above! 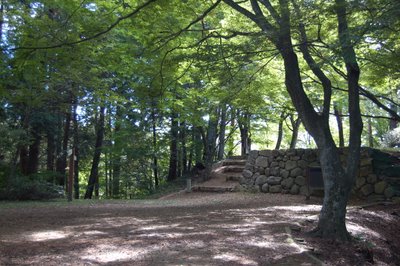 As our last action before catching the bus home, we hiked up to the ruins of Takayama Castle. There is not much more than foundation stones left, but it was a nice peaceful place. Anna's eagle eyes spotted a cute little grass snake, I had to surpress the urge to chase it down and capture it. I guess I have a bit of my father the trailside biologist in me.

Next: World Heritage Thatched Houses.
Posted by Travelingrant at 11:04 AM