My god it's full of temples...

The sound of me messing up an attempt at esoteric meditation. How did it come to this? 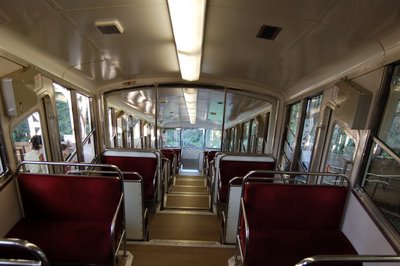 It all started when Zach left half of his huge luggage at my house. He admits that carrying both suitcases to my place from Nagano was one of the stupidest things he ever did, and wasnt about to tackle it while trying to find a new apartment in Osaka. So he asked me if after a few weeks I could bring the second Bag of Doom down to his pad in Kansai. Like a fool I said yes, but to make the trip a bit more worth while Zach suggested we then decamp to Koya-san in Wakayama Prefecture. 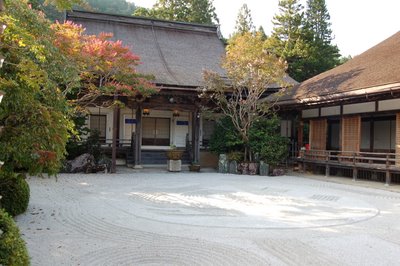 In a high mountain valley, reachable by a very vertigiganous cable car ride, lies the Buddist retreat of Koya-san (Mt Koya). Founded in 819 by one very famous monk named Kukai, Koya-san in the center of Esoteric Shingon Sect Buddism. Of course what is really important is that out of 110 (or so) temples that lie scattered about the area, around 50 of them allow visitors to stay overnight. 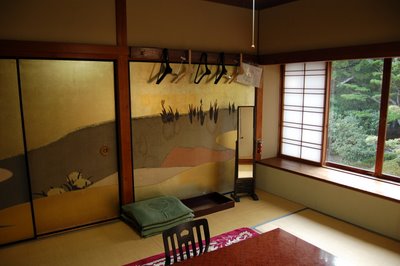 When you spend a year in Japan you do get the chance to see a LOT of temples. Big temples, small temples, new temples, old temples. Enough that they really start to blend together in your memory. However to go from just a tourists glance to actually staying overnight, now that is a rare cultural opportunity. A chance to experience something really new and fascinating, and eat delicious temple food! 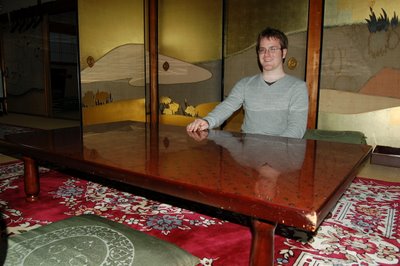 Our temple was over 200 years old, and the art was amazing. Our room had gold leaf covered shoji screens, I wonder if it was Kanazawa gold leaf?, a beautiful view of the garden, and an area larger than both of our apartments combined. Despite the 12 months of residence, I rarely get the chance to sleep on tatami, which is a shame as it really is quite comfortable. Its too bad you can't say that about the rice (beans?) filled torture implements that pass for pillows around here. My ear always feels like Ive been fight Mike Tyson when I wake up! 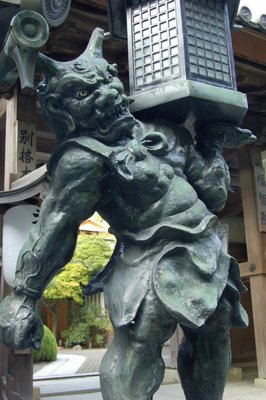 With some time to kill before evening meditation and supper, Zach and I set out for a quick tour of town. We encountered this amazing Demon lamp right down the street from our accomodations. 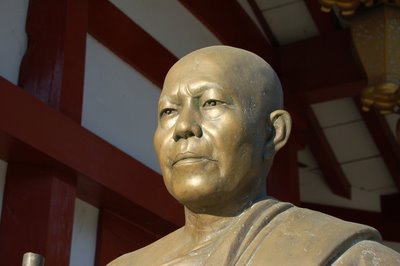 A litte further into town we saw this incredible statue. It is one of the most creepily realistic statues I have ever seen. 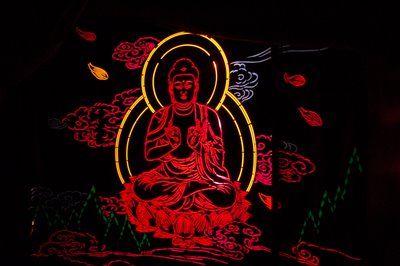 One of the buildings had a pitch black basement that I assume is a Buddist hell. In it were a few displays, including this awsome neon looking one. I have absolutly no idea what significance it has! Looks cool though. ;-) 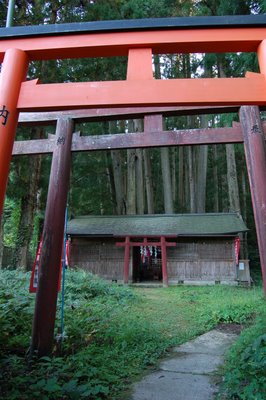 Of course even in a Buddist mecca like Koya-san, there is a Shinto Shrine tucked away, just so nobody forgets that there are TWO major religions around here. This was a beautiful, if rather dilapidated, Inari shrine, which if anybody has been keeping track is still my favorite Shinto deity. Any god that uses foxes as his representitives is OK in my book.

After we got back we settled down in the main chamber along with 5 Spanish travelers and tried our hands at esoteric meditation. The head priest told us to count forward one to ten and then do it backwards. I talked to Zach later and he said we should have done that once, and then emptied our minds. Heh. I thought we had to do it over, and over, and over again. So for around thirty minutes I sat there in a very painful lotus position counting 1-10 10-1. Wow was that an interesting experience, but not one I think I will ever do again. Meditation doesn't seem to be for me.

After our experiment in pain thresholds and sleeping legs, it was time for a fully vegan dinner. No fish, animals, or dairy was harmed in the making of our meal. Despite this fact it was delicious. We had tempura, famous Koya-san tofu, rice, tea, pickles, and a few dishes that I have no idea what they contained. While the lack of steak was troublesome, the meal was amazing. Everything there was delicous, there was not a single bad dish.

After we finished, the mother of the head priest came out to give us a history lesson. She was 84 years old and still very vital. Luckily for us she had earned an English Literature degree at Tokyo University in 1939 or so, and she spoke excellent English. She was great fun, describing both her own life in Koya-san and the history of the area, all the way back to old Kukai. She told us how Kukai didn't actually die, he just decided to start meditating in a cave nearby, and has been at it for over a thousand years! And then it was time for bed, as our wakeup call was 5:45 the next morning.

You sat in the lotus position for 30 MINUTES, counting up to and down from 10??

You didn't tell me this before.
Probably because you knew I would mock you endlessly.