On a clear day, you can see for miles 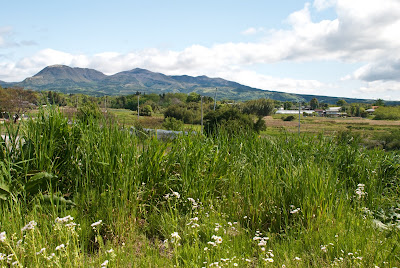 The weather the past few weeks has been strangely cool for this late in spring. Rainy season is soon to be upon us, so it is no surprise that it's been raining a lot lately, but the nice even temperatures are a nice change from the soggy heat that often intrudes around this time of year. 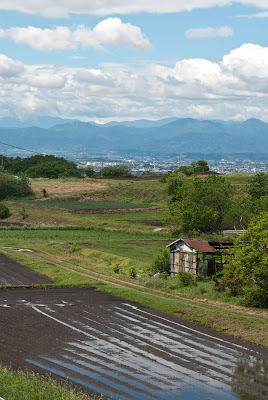 One happy side effect of the rain is when it stops raining, the air is cleared of dust and smog and the views can be tremendous! On Thursdays I teach at a pair of elementary schools further up the slopes of Mt. Akagi, and I've been lucky to have had a pair of ultra clear Thursdays recently. 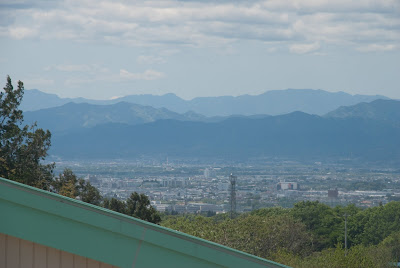 One day, I could see just a glimpse of Mt. Fuji poking above the mountain ranges that lie between us. If you are having trouble spotting Fuji in the above photo, I recommend clicking to enlarge it, and looking for the white spot in the middle left of the photo. While I'll admit that on first blush it's not much of a view of 'ole Fuji San, but consider the fact that the mountain is over 100 kilometers away and on the other side of mountains! I was pretty impressed. Heck, its only the second time I've ever gotten so much of a glimpse of Japan's most famous peak.

Last week we had another sparkling day, and while a line of clouds obscured Mt. Fuji, the view was open all the way to Tokyo! To the left side of this photo are the skyscrapers of Shinjuku, right in downtown Tokyo around 100 kilometers from Maebashi. In the center is the new TV tower that will replace Tokyo Tower as the primary broadcast point for the Kanto Region. The tower is called Tokyo Sky Tree, and even in its uncompleted state is the tallest artificial structure in Japan.  Upon completion in 2012 Tokyo Sky tree will soar 2,080 feet in the air, almost double the height of Tokyo Tower!
Posted by Travelingrant at 8:06 PM

That's pretty far. I live about a 30 minute drive from mountains but I can almost never see them out my window.

That is pretty incredible. ie seeing Tokyo so far away across the flat plain. Nice.