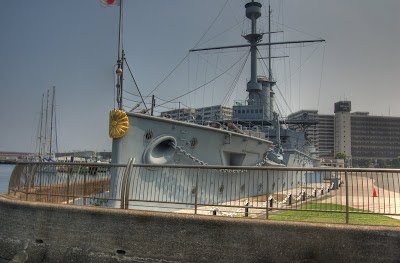 Located south of Tokyo, the city of Yokosuka doesn't have much to offer the normal tourist. Luckily, I am not a normal tourist, so I had a great time in this naval oriented town.

Yokosuka has a long history of ship building, indeed William Adams, the inspiration of the character in the Novel Shogun, lived and is buried in in the city. Yokosuka is still heavily involved in the defense of Japan. The city is has both a major American Navy Base and a Japanese Self-Defense Force Base. 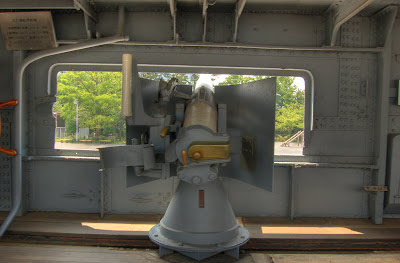 I arrived to take a peek at the battleship Mikasa, a museum ship that has been preserved in a small park along the waterfront. The Mikasa is a rather important icon, as in addition to being the flagship of the Japanese fleet in the battle of Tsushima in the Russo-Japanese War, it is the last remaining pre-dreadnaught ship of the line. 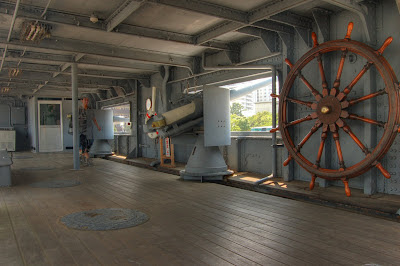 There exists an interesting progression of design, from the broadside cannons of the ironclads of the late 1800s to the turreted main guns of a modern battleship. Ordered from Great Britain in 1898 and delivered to Japan in 1900 after three years of construction, Mikasa was a masterpiece of state of the art naval-design, but she exists as a transitional form. She has two large turrets, with 12-inch guns, but maintains a rather extensive broadside of smaller caliber artillery as well. This design was soon made obsolete by the launch of the HMS Dreadnought, the first "all big gun" battleship that disposed of the broadside armaments for larger numbers of larger guns mounted in turrets. 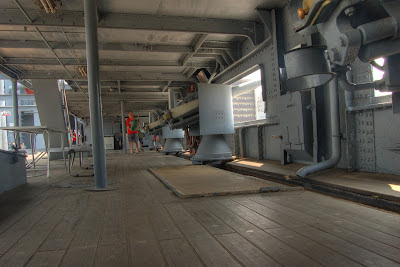 While the technology is interesting, the history is fascinating. The battle of Tsushima is one of the most lopsided naval victories in History, ranking with the Greek victory at Salamis and the English triumph at Trafalgar. The Russian Baltic Squadron dashed around half the world to relieve the besieged Pacific Fleet in Port Arthur. Port Arthur fell before they could arrive, yet they came on anyway, and right into the teeth of the Japanese Battleships. 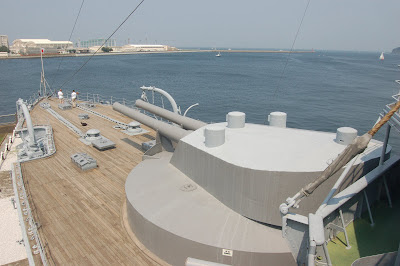 Despite having more heavy ships, the Russian fleet was demolished, losing eight battleships and 5,000 men to Japanese losses of only three small torpedo boats and 116 lives. This marked the end of the war, and in many ways the beginning of the end of Czarist Russia. While the actual revolution would wait, unrest at home and a marked decrease in international prestige, as well as the loss of two major fleets, put the Czarist government on notice.

The actual museum ship was fantastic, many of the guns could be handled, and you could aim at sailboats in the harbor. Almost everywhere on the ship was accessible, and they had some good history lessons, in case you didn't know about the background of the Russo-Japanese War. For a naval buff like myself, it was a perfect day out.
Posted by Travelingrant at 11:37 PM

Good old Grant, slowly sinking civilian sailing ships... What did they ever do to you?

Murf Murf. you should have hidden me in your suitcase. Your "Giant kiwi inside" size suitcase.