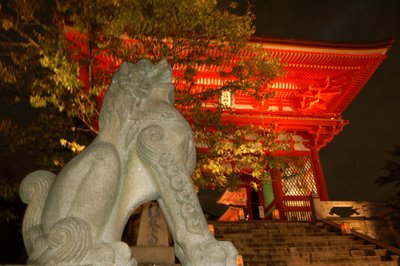 I have now been to Kyoto four times. I have been to Kiyomizu-dera three of those four times. This latest trip was sparked by Zach, who found that, like Kanazawa, Kyoto was lighting up one of their most famous landmarks. Always looking for an excuse to use my tripod I jumped at the chance to see the glorious view at night. 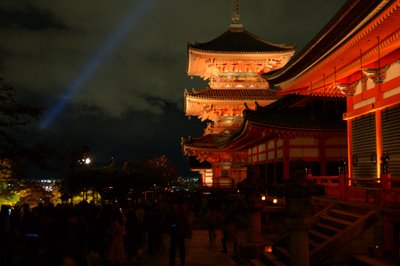 And it was glorious. Just walking around the etherially lit temple was a fantastic experience. The towering vermillion pagoda was brilliant in the flood lights. Above everything an eerie blue spotlight shone like a bright tunnel through the dark. 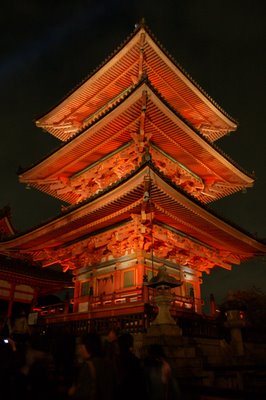 I needn't have bothered bringing the tripod though. To be sure, I needed it, but the crush of the crowd was too much. I never had the space or time to properly set up a night shot. I was forced to wing it with high ISO and a wide open aperature. I managed, barely. I took a whole lot of really, really blurry photos. Even the ones that came out are far from perfect. Even when I was steady as a rock, there was usually somebody kicking, shoving, pushing or just generally jostling me! 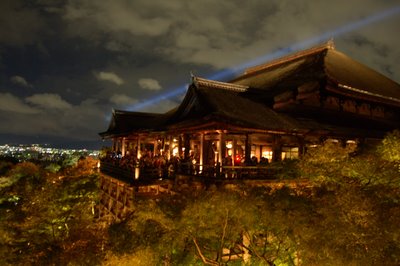 Despite that, it really was great. Fiona remarked that this was really beautiful and her favorite thing of the day. I'd say she spoke for everybody there. It was great. 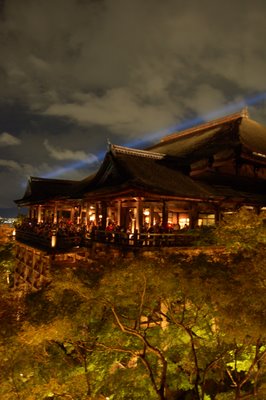 A bit of background on Kiyomizu-dera. The temple was begun in 798 but the building there now date from 1633. The stage and main temple are built in the traditional style sans-nails. Think about that for a little while, especially in a country as earthquake prone as Japan! It is said that if you jump from the stage, and survive, your wish will be granted. Jumping is now prohibited, but heck its only 13 meteres or so, not really that far. Not that I'd be inclined to try it, thats for sure. Also, Kiyomizu-dera is up for inclusion of a New Seven Wonders list. Somebody got it in their head that since of the original 7 only 1 is left we need 6 replacements. There is a 21 'wonder' shortlist and Kiyomizu is on that list along with such sites as the Great Wall, Stonehenge, The Eiffel Tower and Neuschwanstein Castle. 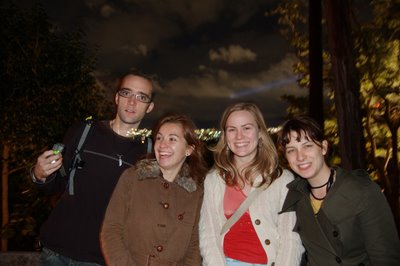 I'll leave you with a bit of strange group photo. Notice I moved a little bit after the flash went off and got the lights of Kyoto cutting Zachs throat. Also we had lost Travis in the the crowd, so it's not quite the whole group. Oops!

Well there it is, Kyoto Fall '06. A good trip, even if the weather didn't cooperate.
Posted by Travelingrant at 11:11 AM

It's like "Back to the Future" and my head is disappearing from the picture. Unless I can get my dad to beat up Biff I'm toast!