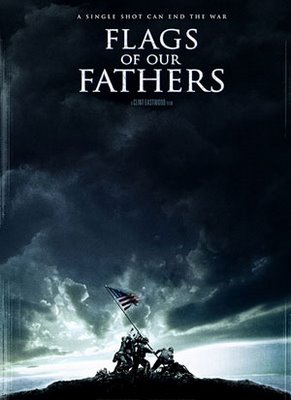 Last weekend I finally got a chance to see Clint Eastwood's newest movie, Flags of Our Fathers. Having read the book, I was eager to see the filmed interpretation.

Overall I really liked it. The acting was all quite solid, and the young men
did a good job. The story of the battle and the aftermath for the boys
is very compelling. The fact that it is all based on a true story makes
it even better, and the fact that the book was written by the son of
one of the 6 'Iwo-Jima Flag Raisers' makes the tale even more heartfelt.

Despite the fact that the famous flag raising was the second flag put up that day, the three remaining soldiers, Navy Corpsmen 'Doc' Bradley, Marine Corps soldiers Rene Gagnon and Ira Hayes, were hailed as conquering heroes
and feted with booze, parties, parades and more popularity then they
know how to handle. That is the real story of the movie, and while some
may wish for a more traditional Saving Private Ryan or Black Hawk Down action/ war movie this detour into unlooked for fame is equally interesting. All the moreso because the men don't feel that they have earned any of this, as they say, the real heroes are the many men who didn't leave the island.

While some may decry the amount of the running time devoted to more mundane pursuits, certainly the battle scenes don't disappoint. Hollywood has gotten very good at simulating huge armadas, fleets, invasions, battles and the like. From the opening bombardment to the flag raising, all is captured in minute detail.

It was interesting to see a few familiar faces from other recent war movies. Barry Pepper (from both We Were Soldiers and Saving Private Ryan) and Neal McDonough, who played Buck Compton in Band of Brothers were both in fairly major roles. The remaining main roles were filled with lesser known actors, at least people I wasn't immediately familiar with. All did a fine job, though I'll admit a few of the faces did run together.

Which brings us to the main problem, and its a big one. The Editing was confusing to say the least. There are flashbacks and flashforwards in just about every conceivable combination. There are way too many time lines running more or less concurrently through the movie. We have the books author James Bradley before his dad's death, we have him interviewing his dad's friends while writing the book, then in the past we have the soldiers in training, on their way to the island, at the battle, and then touring the States as Heroes. In a short amount of running time we may go from an interview to New York to Mt Suribachi and then back to the present, all without a title card! (Though maybe the lack of title cards is because for our version they were replaced with Japanese subtitles, I don't know for sure.) I had read the book and knew the men and their stories, so I could still follow along fine, but if you hadn't then I'm sure some amount of confusion would set in.

Despite the fairly serious flaws I really enjoyed Flags, and I eagerly anticipate Clint's followup told from the Japanese side, Letters from Iwo Jima.
Posted by Travelingrant at 12:27 PM

That's why I couldn't iunderstand much,,,? maybe?
I'd like to see the next movie as well! Then I could understand more for sure, desho?

Sad to report the theatre was empty when we went (granted it was Tuesday afternoon), despite the movie getting quite a bit of local PR, as the military presence on Oahu contributes almost as much to the local economy as tourism.

While I agree that it was a bit scattered in its story line, I thought it illuminated a few things clearly:
1. The power of an image.
2. Never underestimate the collective resolve of the U.S. American public.
3. The Greatest Generation, declining in number with each passing day, deserve our respect for being, just as the movie portrayed, ordinary men, who found themselves in extraordinary circumstances and had a part in changing the course of history.