Is Your Seoul Saved?

After plenty of relaxing on Jeju Island, it was time to visit the big city. Once we arrived at our rather swanky hotel and met up with Travis, the fourth and final member of our team, we headed into the thick of things on an important mission: buying pants. Marcos is a very connected young man, and one of his old friends from college is now an event planner in Seoul. She managed to get us on the list for a pretty fancy club, but they had a dresscode. No Shorts Allowed. It being summer in East Asia, I had not bothered to bring pants and so had to venture downtown to pick up a pair. 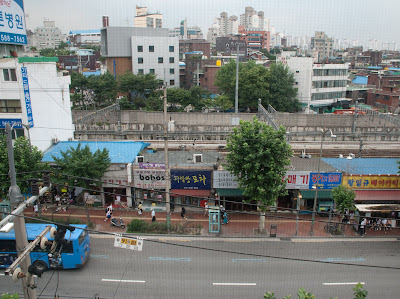 While en-route we stopped off at a street vendor for a rather unique snack, a corn-dog covered in french fries and fried. As far as heart stopping bits of mutated Americana go, it was excellent. For our shopping pleasure we went to a huge mall of individual clothing stalls that were packed with cheap duds that could be had even cheaper if you felt like a bit of bargaining. 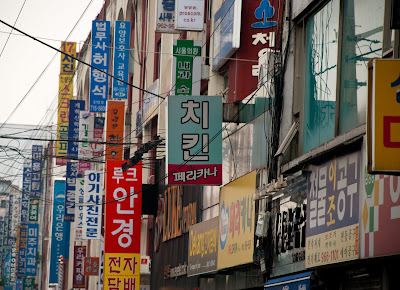 Dinner was in a small local place off one of the side streets, and like every other meal we had in Korea was utterly delicious and shockingly cheap. The dance club itself was intensely swanky, we looked and felt pretty out of place. Though I had fun dancing and seeing how the other half live for an evening. We all had a lot more fun at a restaurant / bar we went to post-clubbing. I enjoy drinking with good friends and good conversation much more than in a dark cavern where you can't even hear yourself think. The next morning we were ready to explore a bit more of what Seoul had to offer.
Posted by Travelingrant at 2:06 PM

okay this may be a little strange to ask of you but do you mind putting up some more pictures of seoul as I always wanted to visit Korea. Even if you don't well I enjoy reading your blog. It's awesome.

Thanks! And there will be plenty more pictures of Seoul coming, and some from the DMZ as well.

looks like a bustling hive of activity and commerce!