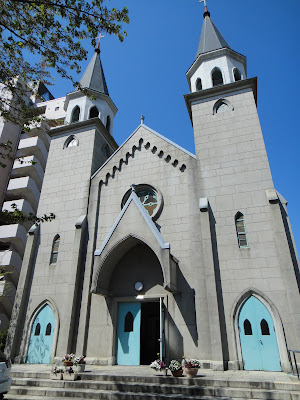 It had been a while since I had seen the inside of a Church, so I tracked down a local one so I could attend Easter Mass. The one I found in downtown Maebashi holds services in English, and Portuguese and Spanish, but only on certain Sundays. For Easter, things were to be in Japanese.

On this perfect spring morning I met up with a friend who was also interested in seeing how things were celebrated locally, even though she leans more Protestant then my own papist persuasion. I was a bit surprised at how full the Church ended up being. It wasn't a very large building, but for obvious reasons you don't expect to run into many Catholics in Japan.The vast majority of those attending were Japanese, though there were a sprinkling of Europeans and Filipinos there as well. In a pleasant surprise, while most of the service was Japanese, they read each reading twice, once in 日本語, and once in English. A few of the hymns were sung in English as well, by a small guitar accompanied choir. Singing the rest of the songs in Japanese was a fun challenge. It wasn't easy trying to read the music and the language at the same time. My results were rather mixed.

In a surprise ending, all the newcomers that day were made to stand up and introduce themselves! It was rather shocking, and a tad bit awkward. As a foreigner here, you know you stand out. You try to avoid standing out too much, but you know that you will never, ever blend in. So you tend to do your best to avoid situations that call even more attention to yourself. Say situations like standing up in church on Easter telling everybody your name and where you come from!

That embarrassing aside over, we ducked out to a local family restaurant for brunch. A quesadilla, Salisbury steak and a chicken cesar salad made for an unusual but delicious Easter meal. 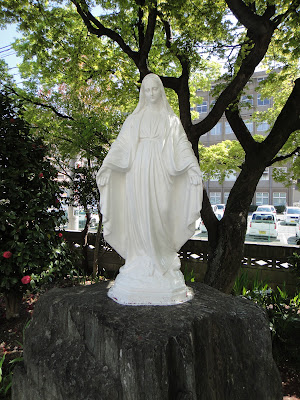 Posted by Travelingrant at 9:21 PM

Standing up and introducing yourself in a church setting is something you would not expect in a church in the U.S.A., a country where such type of introductions are rather standard, much less in Japan. Interesting, so des neh.

I think I've run into the introduction thing before in the States, and possibly in Austria too.

Send me the other pictures!!!
And don't forget the Spanish service later.