The Red Castle in Snow

Snow wise this winter has been very mild. Maebashi is protected by the Echigo mountain range to our west, and so all the precipitation falls on my old stomping grounds in Kanazawa, and points north. The city itself has seen flurries only rarely, and only this week have we got anything worth the name snow. It snowed Wednesday morning, but the accumulation was gone by 10 am. It is snowing now, as I write this though, and is forecast to keep it up over the weekend.

While it has been very nice to not have to deal with the daily tribulations of regular snow fall, it doesn’t really seem like winter without at least an occasional glimpse. Luckily, Mt. Akagi, my backyard dormant volcano, has had a nice snow cap since late December. Recently Peter and I decided to get some  use out of my snow tires and see how things looked up top. 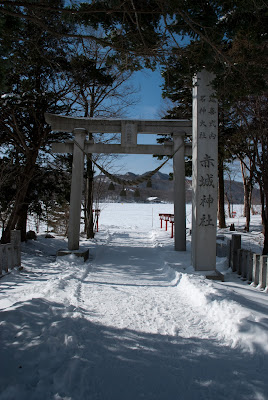 It was a clear day with a deep blue sky, but even from my apartment I could see how fast the wisps of cloud were moving around the summit. Did this inspire me to grab a hat and gloves? Of course not! The drive up wasn’t bad at all, I continue to be impressed with my little car, it really is a champion. 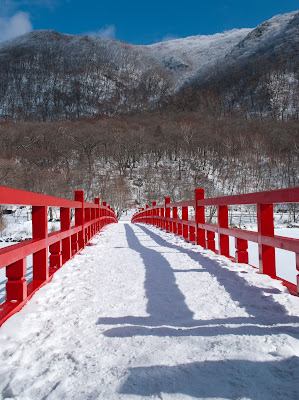 The summit lake is very popular for ice fishing, though I have never really seen the appeal. Fishing itself is fun if a tad boring, but add in biting wind and sub zero temperatures and it just seems like torture. Though there are obviously plenty of people who disagree with me, as the lake was dotted with a fair number of small shelters. 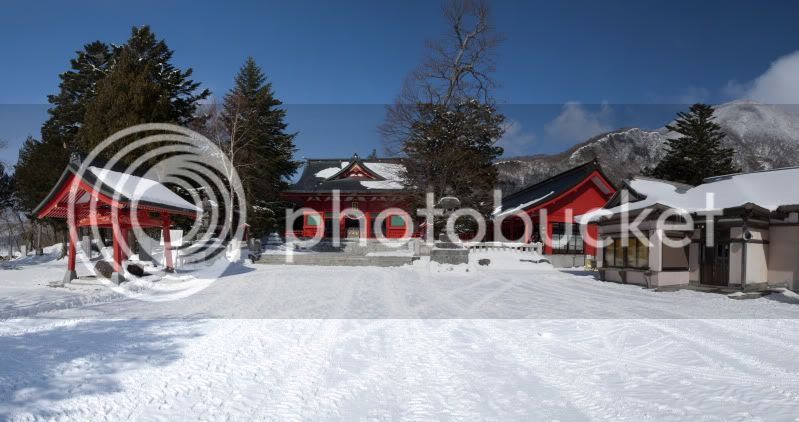 Hatless and gloveless as we were, we still walked from the parking area to Akagi shrine. The area is always beautiful, but the red shrine, white snow and blue sky all came together to be particularly picturesque.
Posted by Travelingrant at 10:09 AM

Looks like you had the place to yourselves... Hard to believe this is possible in Japan.

Well, it is a pretty countryside area. Though a couple did have a bit of a snowball fight while we were up there.

It is quite stunning the red against the white, ま白い！