Festivals Both Sporty and Cultural

In Japan festivals aren’t limited solely to religious celebrations; every school also has a few festivals of their own throughout the year. In September every school has a Sports Festival. The basic idea is like the American Field Day, with races and fun sporty activities for the kids. However, the sports festival is a much bigger deal here. The schools practice for weeks ahead of time. Classes are canceled in the afternoon while the kids practice every aspect of every activity. 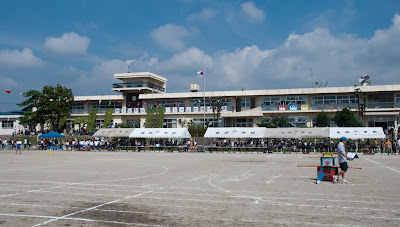 When the day comes, there are opening and closing ceremonies with speeches, and more. One of my schools even had food vendors set up in the parking lot! At the elementary schools the marching band took the field after lunch for a quick display for the assembled parents and siblings. Being September, and being that we were coming off a blisteringly hot summer, I didn’t envy those kids tromping through the sunny field in their full dress uniforms.
In addition to the old field day standards like the relay race, they have more unusual events like whole class jump rope. One of my favorites was a team event where four kids would support one on their shoulders. The top kid would have a hat on, and their job was to collect the hats of the other teams, without surrendering their own hat. It was fun to watch and looked fun to play too! 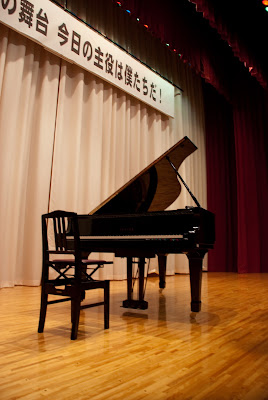 The other, more recent, festival was the Culture Festival. Each school does something different for their Culture Festival. My junior high school set it up so each class (there are 7) wrote and performed a play. Each play was about 20 minutes, and they were wildly different.
One involved a young girl who gets a bad grade on her test, and commits suicide. She doesn’t die right away though, and has time to regret her choice. At the end though, she died anyway. It was beautiful and grim all at once, and absolutely fantastic even if you don’t consider it was written and performed by 13 year olds. Another featured a love story set in the turmoil of the Meiji Era, and climaxed with a sword fight vs the Shinsengumi.
While a lot of the more intricate plot details escaped me, my Japanese listening needs a lot of work, I still had a great time watching my kids give these plays their all. After the lunch break there was an interlude of traditional dances from a local dance troupe. That was followed by a musical presentation by some of the students. The elementary school students came in around then, in time to watch the last two plays. Some of them spotted me sitting in front and I could here whispers of "look, its Grant-sensei!" behind me. Like any proper movie star, I looked back and waved at my adoring fans.
Both festivals were a lot of fun, a way to really experience some of the differences between growing up in America, and growing up in Japan.
Posted by Travelingrant at 4:32 PM