A couple of weeks ago I finally had the chance to catch a Japanese baseball game. The 'home' team was the Saitama Seibu Lions, from the prefecture next door. They played the Osaka Orix Buffaloes, which was the team we ended up rooting for. Entering the stadium, we got to choose which teams 'section' to sit in. I picked the Buffaloes because there were more open seats, so we could sit closer to the field. The Lions took an early lead, and so the American love of the underdog came out and we ended up cheering pretty hard for the boys from Osaka. 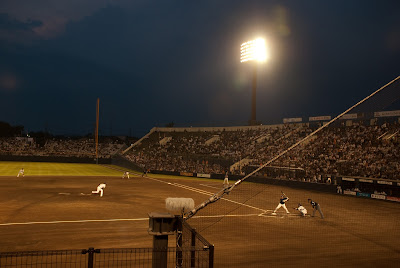 They must have heard us, because despite some horrible baseball on their part in the early part of the game, they came back and ended up winning 8 to 4. I really enjoyed my first trip to a baseball game in Japan. The smaller field made for a much more intimate game. The fans were so much quieter and nicer than at the last American game I saw. Though there were 'cheap seat' cheering sections for each team, each with their own band ready to strike up the team fight song!
Posted by Travelingrant at 6:23 PM

Looks like it was good night for a ball game. Autumn may well be the best season in Japan.