The wind howled through the misty, rain swept blackness. Below, a trail of lights faded into the distance. Above, the same trail seemed to climb forever. The universe was a cold conglomeration of black rock, black night, screaming winds and and frigid horizontal rain. I had to ask myself, just what the heck was I doing here?

Much earlier that day, our group of climbers assembled at the 5th Station, at about 7,000 feet above sea level, roughly half way up the sloping cone of Mt. Fuji. One of the group, Peter, had decided that he wanted to truly climb the entire mountain and had spent the day hiking from the 1st station.  Saner climbers tend to skip that step, making straight for the 5th station, and its collection of restaurants, bus stops, souvenir shops and vending machines.
As we trickled into the meeting area the early clouds burned and blew away in the wind, leaving a crystal clear blue sky. A typhoon was forecast, but there was no evidence in the glorious, near perfect weather to start a late afternoon climb.The vast cone of Fuji-san thrust above, naked and dark with its winter coating of snow long since melted. The black ash and lava flows made for an uninviting peak, and the speed at which the clouds passed over the summit were an unheeded warning that the climb would be less pleasant than hoped.

For most climbers, the plan is to start late in the day, climb through the evening and then sleep in a  mountain hut. After a scant few hours of rest you finish the climb and enjoy the glory of a high mountain sunrise. Those of us who can't really afford the rather steep prices of the huts, about $70 for the cheaper ones, choose instead to climb through the night, forgoing sleep and warmth to be the first to the top, and the dawn. 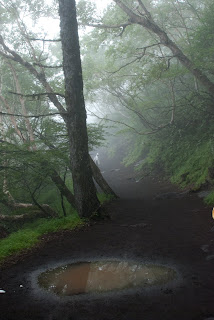 The gentle opening phase was an absolute joy. Despite the recent rains, and the occasional cloud misting its way past us, the weather was perfect for hiking. Not too hot, not too cold, not too dry, not too wet. The trail was well built and maintained, ready for the thousands of people that hike Fuji every year. Our group joked, bantered, took photos, and just enjoyed each others company and this wonderful climb.

The day waned, and the sun began to sink along the other side of the peak, casting a great shadow across the clouds. The trail climbed ever higher, the omnipresent overcast of Japan becoming a far away carpet of cotton balls below.


Full night eventually settled, and the stars, so shy in this overly illuminated nation, came out in all their glory. Climbers who thought to turn off their head lamp for a moment were treated with views of Cassiopeia, The Big Dipper, even the Milky Way. In the distance the vast urban megalopolis of Tokyo could be seen, brilliant lights shining all the way from Yokohama on the coast to Omiya near the mountains. As the night drug on and the altitude increased, the wind picked up, and the cold began to settle. 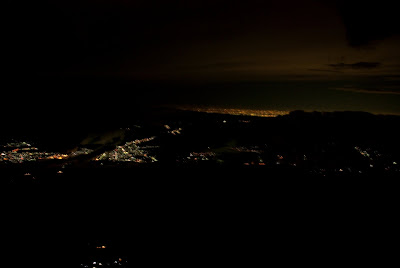 Layers came out, first an extra t-shirt, then a fleece, then a shell, then a hat, finally gloves. We had all walked from sticky summer to frigid winter in just a few miles. The summit and sunrise were driven out of mind, they were many hours off in a remote and unseen future. What mattered was the smaller indications of progress. The next station, the next hut, the next switchback. There was an udon restaurant at the top of the 8th station that became more sought after than heaven itself. We knew it was there, we knew it would be glorious.
Naturally reality was less inviting than the fantasy, but two hours of cat naps and hot food prepped the group for the next challenge, or so we had thought.

It seemed that no sooner had the 8th station faded behind than small flecks of rain appeared in the glow of the headlamps. Faint at first, hardly worthy of notice, yet certainly a harbinger of difficulties to come. Soon, the lights of the cities and the huts below vanished in the enveloping clouds. We went from the top of the world to our own world, cut off from everything and everybody. The end game had arrived, the summit was close. Every step became harder, every foot of elevation gain more precious as we all climbed further into the teeth of the typhoon. The climb grew ever more difficult, fog, rain and exertion rendered glasses useless, and any exposed article of clothing became sopping wet.

At last, the summit of Mt. Fuji, 12,388 ft above sea level. The winds and rain whipped by stronger than ever, speaking was impossible, and waiting for sunrise near suicidal folly. One imperative, one simple goal remained. Descent.
Having stowed my glasses in my pack, I carefully picked my way through the darkness and the jagged black volcanic rocks. They winds gusted at over 70 mph, enough to shift a climber even if he wasn't moving, and more than enough to send you tumbling to the ground if you weren't ready for it.
Slowly, gently definition returned to the world. The black sky became imperceptibly lighter, and then lighter again. The winds and rain remained, but the dawn had finally arrived. 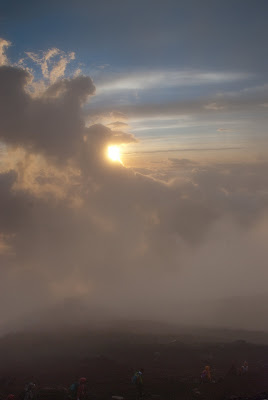 The sun illuminated the trail, and gave visual representation to the speed of the winds, as the clouds sped past us. The sunrise was visible only in spurts, hidden then revealed again by the scudding of the clouds. The pestering rains and winds never stopped, never showed mercy. 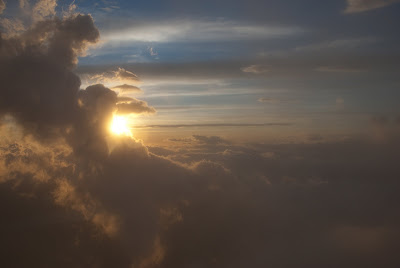 Any decent is a labor, with energy, water, and food running low, but after a rain soaked, wind whipped, typhoon torn climb through the night, the hike down was undoubtedly the most difficult of my life. The winter hat would unravel into my face, blocking my vision. Clenching my fists in my gloves was like wringing out a wash cloth in the shower, except that they never got dry. Heavy, clammy jeans clung to my legs reminding me that I knew better than to wear jeans in the mountains. The humid mid August heat of Japan seemed a far off memory, something that had never been, could never have been real. 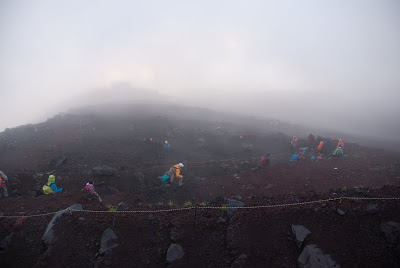 Every time there was a lull in the wind, when the thought that "perhaps it will be easier now" would cross your mind, a cannonade of air would shoot across your back, and remind you that it wouldn't end until you reached the car.
By this point our group of five had splintered into three components. At the top of the 7th station Nick and I encountered a group of rangers who were putting together a 'safety road'. Rather than descend the occasionally rocky ascent trail we had been using, they shunted a large group onto the bulldozer path that provides supply to the mountain huts. The going was much easier on the sandy path, and the line made good time down to the bottom of the 7th station. The end was in sight, but the wind and rain seemed stronger than ever. The urge to be done of this peak, to be home, to be warm, to be fed, to be rested was overwhelming.
Then, a glimpse through the clouds, the fifth station was near. Close, closer, and finally, hands clasped in a ragged cheer we were there. Down. Done.

Well, done except for the three hour drive home anyway...
Posted by Travelingrant at 2:29 PM